I'm not 100% sure why NHL Central Scouting was lukewarm on Brent Seabrook on his draft day. The longtime two-way star NHL defender had a lot of things going for him that year: his offence was strong, he was big, tough, played in the WHL, and acquitted himself quite well at the 2003 U18 World Juniors, getting 3 goals and 6 points in 7 games with a +11 rating. But as I look at Central Scouting's rankings, I see Brent Seabrook at 25th amongst North American players only. Luckily, Chicago's scouts were more right about Seabrook than Central Scouting was, and Seabrook was taken at 14th overall. He'd turn out pretty darn good, riding shotgun to Duncan Keith, taken the year prior in the 2nd round, as controversial GM Mike Smith laid the foundation for Chicago's defence to end the team's Stanley Cup drought through the entry draft. He'd also help pick up a very unique prospect that will be featured later in the re-draft that played a big role in that run as well. But this article is about Seabrook, whose consistent play through the years as a top pairing defenseman ranks him 6th on our Re-Draft.

The San Jose Sharks had an awful 2002-03 NHL season. Everything that could go wrong, quite simply did, and the ramifications of what happened during this season would impact the league's power balance for years to come. The Sharks were considered a dark horse Stanley Cup favourite for the past two years, a team with three strong forward lines, an interesting group of homegrown defensemen, and a wealth of depth in goal. GM Dean Lombardi and Head Coach Darryl Sutter (sound familiar?) had helped groom the Sharks out of their expansion era and into their first prolonged era of success. The team won the Pacific Division title in 2001-02 and took the Colorado Avalanche to a Game 7 in the Conference Semifinals the year before in a classic series. Things were looking up... but the young players that the Sharks were building around were looking to get paid, and Lombardi felt like playing some hardball. Those players? Young emerging top 4 defenseman Brad Stuart and goaltender Evgeni Nabokov. The holdouts lasted into the start of the regular season and blew up in Lombardi's face. Miikka Kiprusoff put up a terrible .879 SV% in Nabokov's absence and eventually lost the backup job to Vesa Toskala.

By the time the players were signed, the team was already in a spiral. Soon both Sutter and Lombardi were out the door. Doug Wilson took over as GM and Ron Wilson came on as coach. Sutter landed in Calgary and eventually became Coach and GM, and would trade for Kiprusoff within two months of the 2003-04 regular season. San Jose quickly recovered, and Stuart was eventually used as a key component in the trade that would bring Joe Thornton to San Jose. Lombardi went to work in Philadelphia as an assistant, and eventually got another GM job in Los Angeles. When Sutter got the boot in Calgary, and in need of a new coach, Lombardi brought Sutter on as LA's coach. And there's your Stanley Cup champion, 10 years later.

The Sharks took a player that played a big role in their rebuild going forward here in Milan Michalek, the first pick of the Doug Wilson era that is still going on now nearly 10 years later. The Sharks have had a lot of success under Doug Wilson, but the Cup remains elusive. Lombardi and Sutter, meanwhile, are enjoying life BIG TIME right now.

Like I alluded to in the opening paragraph, opinions must have been a bit mixed on Seabrook heading into the NHL Draft. I can't place a statistical reason behind him being viewed as less than the big 3 of Ryan Suter, Braydon Coburn or Dion Phaneuf in the Draft, but after those three were taken the next four teams all took forwards instead. Seabrook would continue to toil for Lethbridge in the WHL after being drafted, putting up good numbers but not getting the chance to go on a deep playoff run. His season highlights were representing Canada at the 2004 and 2005 World Junior Championships, getting a silver and gold medal. When the nearly year long NHL lockout ended, Seabrook was ready for a regular NHL job with the Chicago Blackhawks and he was able to click with fellow rookie Duncan Keith early as one of the lone bright spots for Blackhawks fans coming out of the lockout.

After the jump, we've got Seabrook's career trajectory broken out in a bit more detail: 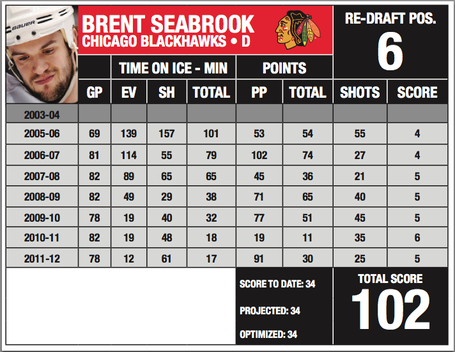 Editor's Note: The stats above indicate league rank (defensemen only) in each category except Games Played (GP) and Score. Score is defined in the introduction, on a scale of 0.5 to 6 with bonus half points given for year end awards.

Seabrook came along quite nicely in the NHL. He's never really had a major setback and has been a top pairing player for five years now, and he plays the toughest minutes in the NHL. Over the five year period of Behind the Net data, Seabrook has been 39th, 2nd, 11th, 2nd and 2nd in terms of QCOMP faced for regular NHL defensemen. He's done the tough job for Chicago for several years, while also providing a great slapshot that has been a big asset on the power play, as well as leading Chicago's D in shorthanded ice time in that time period. He's generally never had enough of an offensive game to push into the elite status, although I gave him credit for that in 2010-11. In general Seabrook is simply a quality all-round defender who could play the right side on almost any NHL team's top pairing. In fact, he did that for the 2010 Stanley Cup Champions, and was also distinguished enough to be part of the 2010 Canadian Olympic gold medal winning team (although he was sparingly used).

Side Note: All of the players taken so far were part of that 2010 Canadian Olympic team, except for Dion Phaneuf who was going through a rough part of his career at the time.

Seabrook may have been a bit of an afterthought without a big spotlight early in his career, but he's looked pretty good on a top club in Chicago for the past few years. While some might have viewed him as a reach in 2003 at 14th overall, but his overall value to the Blackhawks has been so substantial that he's turned into one of the better picks of 2003 as a whole. It would've been a bold move for a team like the Sharks to pick him in this spot in 2003, but they would've been handsomely rewarded if they had.