This one requires a bit of explanation. The 2003 NHL Draft had a unique position versus other drafts: one of the key value seasons was wiped out entirely in this evaluation. The cancelled 2004-05 season meant that any team that used one of their 2003 NHL Draft selections in the 2003-04 NHL season lost a year of service from their player, and they only had to play six NHL seasons in order to reach unrestricted free agency. Therefore, players like Eric Staal became a bit less valuable. Eric Staal has had the single most productive career of any of the 2003 NHL Draft class, but if he had wanted to, he could've left Carolina two full seasons ago as an unrestricted free agent. That he didn't is a great thing for the Carolina Hurricanes, but it doesn't change this ranking at all. The four players placed ahead of Staal on this list provided more value overall to their clubs as a draft selection. Make sense?

The Buffalo Sabres had one of their worst seasons in recent memory in 2002-03, finishing dead last in the Northeast for the second straight season and dropping into a lottery standing in the process. Their 72 point finish was by far the worst season they posted under Lindy Ruff as Head Coach, as their offence completely dried up. The team made a bold move at the trade deadline, acquiring Daniel Briere from the Phoenix Coyotes in a trade that sent Chris Gratton out of town, and instantly Briere proved he was a legitimate offensive threat with 12 points in 14 games. With a rare chance to pick near the top of the board, Buffalo focused on the dynamic Austrian goal scorer Tomas Vanek, who had come over to the United States to play in the NCAA. Vanek was the top NCAA player taken in the entry draft and highest ever Austrian taken, and would be one of the better picks in the top 5 of this draft. The trade for Briere and the pick of Vanek represented an organizational shift towards offensive talent in the post-Dominik Hasek era in Buffalo, and would pay huge dividends in the first two seasons coming out of the lockout.

Eric Staal was the top ranked North American skater according to Central Scouting, and had a plurality of scouts on his side as the top pick in the 2003 NHL Entry Draft. However, the hype around Marc-Andre Fleury and the desire for teams to add a top goaltender after seeing Jean-Sebastien Giguere and Martin Brodeur stifle opposition in the 2003 playoffs changed the plans. Florida apparently didn't think Staal was necessarily the best forward available either, and were happy with Nathan Horton instead. This was despite a dominant junior season from Staal, scoring 98 points in just 66 regular season OHL games and 14 points in 7 playoff games. It was his third OHL season, and he averaged 1.13 points per game and over a point a game in each of his three playoff years. The first of the Staal brothers was definitely impressive, but somehow was overshadowed by Fleury on draft day. The Hurricanes were the beneficiaries of the craziness, and they can probably thank Pittsburgh Penguins GM Craig Patrick for their 2006 Stanley Cup as a result.

After the jump, we'll break down Staal's NHL career to date in more detail: 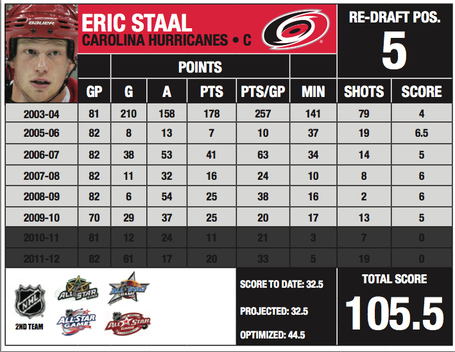 Editor's Note: The Stats above indicate league rank (forwards only) in each category except Games Played (GP) and Score. Score is defined in the introduction, on a scale of 0.5 to 6 with bonus half points given for year end awards.

As a teenager in the NHL, Staal fared decently on a poor Carolina team. In fact, he was so good as a late '84 birthdate that it would've been very hard for any team to consider leaving him out of the NHL entirely. He wasn't the top 2003 Draft graduate to play in 2003-04, but considering the team he was on he did quite well. His shooting percentage was terrible and probably deflated his goal total compared to his peers, but it's possible he just took a lot of shots from playing the point on the PP, a role he has taken on throughout his career. Every year but one he's had a lower goals rank than shots rank, just never as extreme as it was as a teenager. During the NHL lockout he put up a point per game pace in the AHL and improved on that in the wide open 2005-06 NHL season, his most dominant offensive season to date. In fact, it can be argued that by utilizing Staal so early, even if it was an inefficient use of years of service, the Hurricanes were able to win the 2006 Stanley Cup with an All-Star calibre centre in Staal as their 2nd centre that year behind Rod Brind'Amour.

Since then, he's consistently been a top line player who has had multiple All-Star calibre seasons. He's been one of the league's better goal scorers and for five straight years has been one of the top players in terms of shots and minutes played. Carolina drafted a true franchise player with their 2nd overall pick, and they were handsomely rewarded in 2006 because of it. Unfortunately, they haven't been able to keep up a strong supporting roster since then. The good news for them is that Staal committed long term to the franchise and just recently the team was able to add his brother Jordan long term as well to give him added support. Fifth overall seems low for Staal, and it is. If someone were to make an argument to draft him first overall in a re-draft I couldn't blame them. No one has had a more distinguished career in terms of consistently being an elite player, particularly combined with excellent health. The lockout's wasted value season is the only reason he's this low on the list. His optimized draft pick value is higher than Shea Weber's, although as I mentioned, it would've been hard for any franchise, even the league's best, to hold him out of the NHL in 2003-04. He was definitely ready.