Out of this whole draft class, there has probably not been a more discussed player than Dion Phaneuf. Dynamic offensively, middling defensively, thunderous bodychecker, and also one of the first young players to sign a big contract after his rookie deal expired. There's been a lot of ink spilled and highlights flashed on Dion (and not just courtesy of his hair on draft day), making him a hot topic of discussion by fans and pundits alike. Early in his career, there were discussions about whether you'd rather build a team around Sidney Crosby, Alexander Ovechkin, or Phaneuf as a dark horse candidate. So while it's easy to view his career with a bit of a 'but he isn't THAT good' attitude, in the end, he's still very, very good.

The Columbus Blue Jackets were being run by GM Doug MacLean at the time. They were trying to slowly build a playoff team through the draft, but by 2003 the timeline for building a competitive team was starting to seem too far away. They spent their franchise's two first round picks on Rostislav Klesla and Pascal Leclaire, hoping to shore up their goals against without a big emphasis on scoring. Rick Nash in 2002 was the start of building their offence, and there was a definite feeling that they'd have to target more offence in 2003. Also bothering Columbus at this time? The Minnesota Wild, their expansion cousins, had just completed a run to the Western Conference Finals in their first playoff berth. They needed to start making some moves beyond waiting on their young core to mature.

At least that was the perception. In reality, they finished 16th in goals for in 2002-03 but a dismal 29th in goals against. The Blue Jackets needed centres more than wingers, but couldn't pass up the talented Russian winger sitting on the table at 4th overall. If they had only known how the centres in this draft would turn out relative to the wingers, they'd have gone a different route. Nikolay Zherdev became a Blue Jacket.

When the Calgary Flames stepped up to the microphone and picked Phaneuf, new GM Darryl Sutter hugged the young man in a very untypical burst of emotion. Phaneuf had been playing for Sutter's younger brother Brent in Red Deer of the WHL, and he was the prototypical young defenseman: he had a big shot, he made big hits, he was tough and very intimidating. Scott Stevens at the time was viewed as a comparable, and the Devils had just won another Stanley Cup and had been the best franchise of the past four seasons. The philosophy of building around your defence was quite pervasive at the time, and Phaneuf was a popular choice for the Flames. There seemed to be little doubt who they would pick if they had the chance. I even joked about the possibility with Flames fans I knew, that when it was said that the first overall pick was being shopped that Calgary would probably still pick Phaneuf if they moved up to number one.

Dion wasn't the most loved defenseman on the board that day, though. He was the third D picked, behind Ryan Suter and the towering Braydon Coburn, which was exactly where Phaneuf was ranked by Central Scouting, who actually had Coburn ahead of Suter in their rankings. Phaneuf was the most dynamic offensively of the group, scoring 16 goals in the 2002-03 regular season and 7 more in the playoffs as the Rebels made their third consecutive WHL Final.

After the jump, we'll look at what Dion did right, but also what he did wrong in his career to prevent him from being the best player taken in the 2003 Draft that many predicted he would be early in his career. 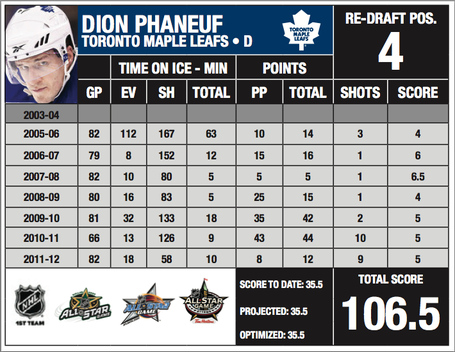 Editor's Note: The stats above indicate league rank (defensemen only) in each category except Games Played (GP and Score. Score is defined in the introduction, on a scale of 0.5 to 6 with bonus half points given for year end awards.

This Dion ranking will require a bit of extra information. Offensively, Phaneuf has consistently ranked near the top of the NHL, in an elite category. The defensive metrics I was tracking are underrepresented in the graphic due to the restraints of space. Starting in 2008-09, Phaneuf's defensive shortcomings became painfully evident. He was able to fare decently early in his career in a slightly protected role, but something happened in 2008-09 that really started to set off alarm bells. Here's an extended look at Phaneuf's Quality of Competition rank and Goals Against/60 rank from 2007-08 on (the only data we have in these categories):

It's very tough to weigh the value of such strong offensive performance as Dion provides with this poor display of defence. 2007-08 his offence was so elite that his middling defence seemed excusable... it was also the year he was selected to the NHL's 1st All-Star Team. But 2008-09 was autrocious, and when he moved to Toronto, while playing very tough minutes, his defence was still below average. When looking at these numbers, remember that there are 180 defensemen playing in the top 6 of a NHL team, and every thirty spots represents a one position drop on the depth chart. Bad goaltending in Toronto hasn't helped Phaneuf's reputation, but the issues preceded his stint in Toronto.

So, in summary, Phaneuf has been an elite offensive defenseman who throws big hits but plays average to below average defensively. That's still a tremendously valuable asset, and surrounded by a stronger defensive core in Calgary earlier in his career brought Phaneuf's performance to All-Star quality. However, without the help around him, his performance has suffered.

Side Note: you may notice that Phaneuf and Perry's scores were identical in the end. I chose Perry over Phaneuf due to more recent success, which was my tiebreaker in these instances as it, in theory, provides a better indication of who the better player will be later in their career.