Too slow, too skinny, too fancy for the NHL. Scouts had divisive opinions on Corey Perry, and those were the three faults that were going to keep him from making it, according to his biggest critics. Perry racked up points for the London Knights of the OHL, playing at almost a point per game pace as a 16 year old, and he only improved as a 17 year old. Still, the belief that his game wouldn't fly in the NHL was very strong. Central Scouting had the slick winger as the 35th best skater from North America. In lamens terms, he was labelled as too risky for a first round pick. Let alone 3rd overall.

The Florida Panthers originally won the draft lottery, but a draft weekend trade saw them flip picks with Pittsburgh and add Mikael Samuelsson in the process. The Panthers were still re-building from the Pavel Bure high-flying days of the late 1990s. They had a top young goalie in Roberto Luongo, drafted a top young defensemen in Jay Bouwmeester the year before, and were the eventual beneficiaries of Olli Jokinen's late development. Young forwards like Kristian Huselius and Stephen Weiss were the other building blocks for a young Panthers team, but it was a dysfunctional team that featured a power struggle between GM Rick Dudley and Head Coach Mike Keenan. The team was bad, they were in the lottery after all, they couldn't score and Luongo got routinely peppered. They needed offence, and knowing that Pittsburgh was offering a marginal offensive talent in Samuelsson and were not going to pick a forward with their first pick it was a smart move from a Florida perspective. They thought Nathan Horton was another strong piece for their rebuild, giving them a potential power forward to go along with the skill of Huselius and Weiss. The Panthers weren't necessarily wrong in their assessment in 2003, but for many reasons their rebuild would become a failure.

As is the case with risky picks, it often takes a team with a few high picks to take a chance on him. The Mighty Ducks of Anaheim scored big on the falling Ryan Getzlaf with their first pick, 19th overall, and our second overall pick in this re-draft. With that knowledge, the Ducks made a move to acquire a second first rounder to nab Perry, trading the 36th and 54th overall selections to the Dallas Stars for the 28th overall pick. Getzlaf and Perry have been together ever since, from World Junior Championships to the AHL to the NHL to the 2010 Olympics, Perry and Getzlaf have been a pairing.

The doubting fo Perry never stopped until he made it to the NHL. He was in the last cuts for the 2004 Canadian World Junior team, and made the 2005 team (often considered the best ever assmebled) only as the extra forward. He worked his way up with the help of injury to the top line with Sidney Crosby and Patrice Bergeron continuing to put up big point totals as per usual. Bryan Murray, upon seeing his 2003-04 Mighty Ducks struggle, offered up Corey Perry as the centerpiece of a deal for Oilers holdout Mike Comrie, only to be 'outbid' by a deal from the Flyers involving Jeff Woywitka. The doubters never stopped.

After the jump, we'll see how Perry not just survived but thrived as a slow, skinny, dirty dangler in the NHL. 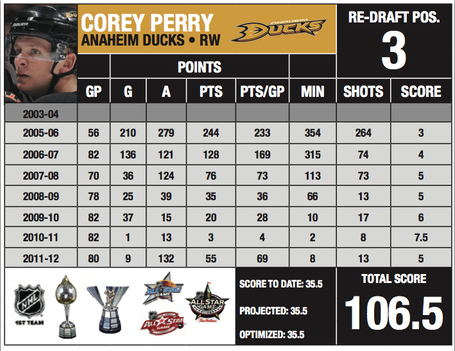 Editor's Note: The stats above indicate league rank (forwards only) in each category except Games Played (GP) and Score. Score is defined in the introduction, on a scale of 0.5 to 6 with bonus half points given for year end awards.

Perry is a rare case of a player steadily improving with every year... until he was so good that he couldn't possibly repeat his performance. Perry played a sheltered role with the (Mighty) Ducks as they emerged as a contender after the lockout and a champion in 2007. But he was always a step behind Getzlaf in terms of usage by the Ducks, who grew into a first line and All-Star status by his third season. However, no one else in this draft class had the great single season that Perry had in 2010-11. Perry won the Hart Trophy, the Rocket Richard, and was a 1st team All-Star that year, performing at an elite level in every statistical category tracked above. It also marked the sixth straight season of improvement from Perry. He's a top line winger that can push to an elite player in any given season.

Like Getzlaf, Perry was used ideally by the Ducks. He was brought along at an appropriate pace, wasn't rushed to the NHL and were able to win a Stanley Cup while both of them were still on their entry level deals. The pairing likely helped their individual ratings in this project, but health also played a key role: since being called up in 2005, Perry has only missed 16 total regular season games.

Wait, weren't the big mean defensemen of the NHL supposed to keep skinny boy out of the league altogether?