AHL to NHL Translations: Save Percentage

Share All sharing options for: AHL to NHL Translations: Save Percentage

In the NHL stats community, plenty has been done to look at how well skaters scoring rates translate from one league to another, especially the most common NHL transition from its AHL farm teams. However no one has bothered to take a look at goaltending translations before. In the same vein as my previous AHL to NHL shot translation work, I endeavor to rectify this by looking at the relationship between AHL and NHL performance in the primary goaltender statistic: Save Percentage.

As EOTP editor Chris Boyle will speak endlessly about, save percentage is a pretty flawed stat. So much so that a sample size of 4000 shots, enough for 3 seasons of work as a starting goaltending is considered necessary to have any real predictive value on future performance. However, its is the only commonly collected goaltending stat that in fact has anything to do with goaltending itself, with wins and GAA being blatantly team stats collected for goaltenders. As such it remains the best statistic available for comparing two leagues on goaltending.

From NHL.com's list of active NHL goaltenders a list of players was compiled meeting the following criteria:

Consecutive seasons in the AHL and NHL where the goaltender played 20+ games in each league since the 2000-2001 AHL season.

Average Goaltending Results For Each Season

Taking the average save percentage of each season as well as the total average shows this population of AHL goaltenders had ~.917 save percentage while they were ~.910 in each year in the NHL. Consistent results from each season makes this very likely to be a real result given the volatility of goaltender's save percentage on a year to year basis. From this result we might surmise that an average NHL shot is ~.7% more likely to beat a goaltender than a AHL goaltender, which for these goaltenders means that the NHL shooters were {(1-.910/(1-.917)=1.084} 8.4% more effective at scoring goals than their AHL counterparts.

To double check these results from being biased from the different amount of shots taken by each individual goaltender, I took recalculated these results based on total goals and total shots against in each league.

The results ended up largely the same as just averaging the goaltender's save percentage.

Individual Translation from AHL to NHL

Next I looked to see what the relationship between AHL and NHL save percentage was. 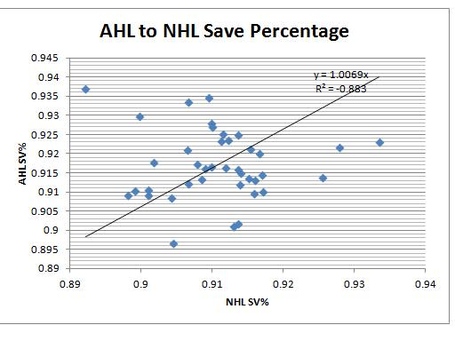 From these results we can conclude the following;

- The average NHL shot is tougher to stop than the average AHL shot but not by a huge margin. ~8% difference between NHL average and AHL average is smaller than the gap between the top and bottom quarter of the NHL.

- Single seasons in the AHL mean virtually nothing for the purposes of predicting an individual goaltender's next season in the NHL. Using the power of bigger sample sizes we can see that there is a legitimate "League Difficulty Rating" for Save% of ~ -0.007 but we can't really call it a translation factor if it doesn't predict future individual performance.

- If the difference between goaltending difficulty in the two leagues is this small then we can say that there is very little difference between a good AHL goaltender and a poor NHL one. In fact its probably reasonable to say that a good AHL goaltender could be just as good as a mid-level NHL one. Which is borne out by the tendency for goaltenders to come out of the AHL and have great seasons in their rookie year.

- Given the demonstrated season to season volatility and the apparent pool of relatively equal goaltending talent in the AHL to the lesser NHL, its pretty easy to come to conclusion that the difference between many NHL goalies and their AHL brethren is they got hot and performed well when they got an opportunity to play a significant number of NHL games.