It's pretty appropriate where our next selection landed. Jeff Carter has worn jersey numbers 17, 7, and 77 in the NHL, and wore number 7 as part of Team Canada at the 2004 and 2005 World Junior Championships where he emerged as one of the brightest stars of the NHL lockout. Coming in at #7 in our re-draft, it's a jump of four spots for Carter from his actual 2003 draft spot of 11th. And for Canadiens fans who like to bemoan the Habs 10th overall selection of Andrei Kostitsyn, Carter is the big 'what if'. Of course, it helps to have some context on Carter as a draft prospect rather than get too concerned about the guy that went right after your guy. In 2003, Jeff Carter at #11 overall was considered a reach. But the Flyers, like so many of their first round forward picks over the years, knew better than others.

The Nashville Predators were slowly and steadily trying to build a strong organization as cheaply as possible. Starting with nothing, David Poile had built a roster that included Kimmo Timmonen, David Legwand, Scott Hartnell, Scott Walker, Martin Erat, Karlis Skrastins (RIP), Mark Eaton and had recently seen Tomas Vokoun emerge as a bonafide number one goaltender. Things were starting to come into place, as the team finished in the top 10 in goals against in 2002-03 despite finishing with only 74 points. The team really was focusing on being a strong defensive team right from the beginning, and despite having one of the league's worst offences they continued on their path of looking to improve from the blueline forward. Even with Dan Hamhuis in the system and ready to go, the Predators continued their blueline build, picking the first defensemen in the draft in Ryan Suter. Suter was the first of three picks by the Predators all used on defensemen, using their second rounders on Kevin Klein and of course Shea Weber. Suter would emerge as one of the NHL's top defensemen but it took a while for that to happen. And of course, once he reached that plateau, we now know that he would break Poile's heart by leaving town for an even more recent expansion team, the Minnesota Wild.

Ranked 27th amongst North American skaters by Central Scouting, Jeff Carter couldn't have been expecting to hear his name called on that day. In the photo archive I'm going through for this pick, I noticed a shot of the prospects in the crowd waiting to be picked, and Eric Staal, Anthony Stewart, and Jeff Carter were lined up one in front of the other with their families. The photo credits both Staal and Stewart, but didn't seem to pick up on the significant player very prominent in the third row. He just wasn't a big deal in the months leading up to June 2003. Like Seabrook, it's hard to figure out why he wasn't more popular going into that day: he was a big rangy centre who could score at an impressive pace. He was over a point per game in his draft season and had a strong U18 World Junior tournament as well. The Flyers, never known to back away from a talented young Canadian forward in the first round, snapped him up and got a heck of a player moving forward. They'd later add Mike Richards as well and get the core of their team from about 2007-11. 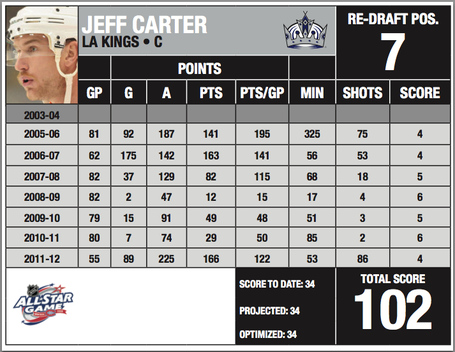 Editor's Note: The stats above indicate league rank (forwards only) in each category except Games Played (GP) and Score. Score is defined in the introduction, on a scale of 0.5 to 6 with bonus half points given for year end awards.

Even as a sparsely used rookie, and even when he missed 20 and 27 games in a season, Jeff Carter took a lot of shots. He has never once not been one of the top 90 shot takers in the league, and as a result he's been one of the top goal scorers in the NHL since he emerged as a rookie on the scene in 2005-06. Over time, his pure offensive talents also found use in increased minutes all around, including becoming a top threat on the penalty kill. His playmaking skills have set him back a bit, and he now spends time on right wing for Los Angeles. His second half of his career could be very different from his first in that regard. Carter's been criticized quite a lot publicly, for his refusal to submit to Peter Laviolette's 'Dry Island' in Philadelphia, a poor attitude upon being traded to Columbus last offseason, which led to him being an easy trade target for the Kings at the 2012 trade deadline.

After he went to LA, the rumbling never really stopped, but the Kings winning took off. Even for a bad year, Carter still managed 29 goals in 75 regular season and playoff games. It remains to be seen what kind of long term impact he'll have on the Kings, as he is signed to one of those massive long term deals (he's locked up for the next 10 seasons). He has enough of an all-around game to find ways to contribute even if his goal scoring goes down, but based on his shot rates, we have to think he's still got quite a lot of goals still left in him.