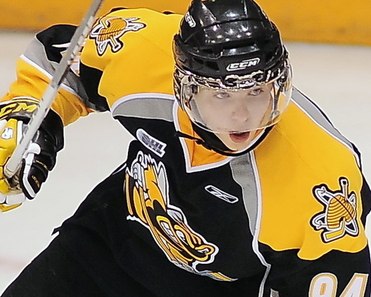 Over the next few days, I will be looking forward to next weekend's 2012 NHL Draft with a three-part feature which will include discussion of the Canadiens' 3rd overall selection, their picks in the remaining rounds, and a mock draft of the first thirty selections.

When it comes time for the Montreal Canadiens to select for the first time in the 2012 NHL Draft, who knows what the board will look like. Presuming Marc Bergevin decides to remain at 3rd overall, it is a virtual certainty that top-ranked Nail Yakupov will be gone. That is unfortunate, because a high-scoring NHL-ready offensive winger would look great alongside Tomas Plekanec, David Desharnais, or Lars Eller, depending on how Therrien would decide to distribute the talent. According to Igor Larionov, the agent for Yakupov and teammate Alex Galchenyuk, the Canadiens are interested in his clients. Who wouldn't be? Nail, the winger, had 170 points in 107 games in two years with the Sarnia Sting. Galchenyuk, his linemate in 2010-2011 before being sidelined with a torn ACL for most of this past season, registered 83 points in 68 games that year. Larionov, however, has also noted the Leafs want his guys, and that they will attempt to trade up to get at least one of them. The problem with that scenario is that it would leave the Habs with slim pickings. Sure, there are top defensemen like Ryan Murray, Mathew Dumba, and Griffin Reinhart, but with Subban, Yemelin, Beaulieu, Tinordi, and Ellis already with the organization, the area of need is clearly up front. There is Filip Forsberg, but the Swedish winger, although a fairly sure-fire future NHLer, is said to have limited upside compared with the other top prospects. There is Quebec Remparts centre Mikhail Grigorenko, but questions about his commitment, consistency and defensive capabilities have led many to sour on him. Galchenyuk is now seen by most as the "ideal" pick for Montreal. But as with all of the top prospects, he's a risk. So is Galchenyuk really the right pick for Montreal, and how important is it that he dons the bleu-blanc-rouge?

I have been on the Alex Galchenyuk bandwagon for months now. The first time I compared highlights of the Sarnia centre (Future Considerations #2, International Scouting Service #14) with Quebec’s Mikhail Grigorenko, I noticed an important distinction. While many of Grigorenko’s highlights could be attributed to poor defending or goaltending, or even him being set up for open nets, I saw Galchenyuk driving the net, making moves that would leave even Jonathan Quick on his back, and using his size to take the puck to dangerous areas. While it is obviously difficult to make judgments based on such a limited sample, it was just enough to open my mind to his potential, despite his not having played for a year, and to consider his case rather than just accept Grigorenko as the guy.

Obviously, injuries for Galchenyuk are the biggest concern. While on one level, the fact that Galchenyuk missed most of this season with a torn ACL is concerning because of the risk of re-injury, I trust that doctors will do their due diligence, and if he is selected this high, it will be because that risk is fairly minimal. The bigger problem, however, is that Alex has lost a year of development, and scouts have lost a year of being able to evaluate him.

"The value of draft year information is extremely vital. It's why scouts spend an entire season watching players on a nightly basis. Players can and usually do change in some form or fashion during a season, for better or worse. This happens before they get drafted and afterwards, which is why players' prospect value is a very fluid process that could go way up or down depending on the information scouts continuously collect over each season. Let us take this draft class as an example. If the 2012 draft would have been held back in August, prospects like Nick Ebert and Matia Marcantuoni could very likely have been top-10 picks based on what the industry thought of them then. However, a full draft season later, if they went in the top 60 I would be surprised after disappointing scouts for most of this season. It's unfortunate they dropped so much, but for a player like Nick Ebert should he have gotten injured in the summer, where would he be projected to be drafted? If people were going based on just information gathered last season and maybe a handful of games this year, I'd say it would certainly be in the top 30." - Corey Pronman, Hockey Prospectus

A past example of what has happened to Ebert and Marcantuoni is the case of Angelo Esposito, a player projected to go #1 overall as late as the summer before his draft year. A poor final season in the QMJHL, however, led him to slide, and as of now he has been nothing but a bust, yet to play in the NHL after being drafted 20th overall by the Penguins in ’07. So how do we know that Alex Galchenyuk won’t be a bust as well? Well the truth is, we don’t. Drafting is far from an exact science, and the smaller the sample size in terms of games played, the more that must be inferred, rather than observed. But there are reasons why his stock has remained so high despite this injury.

"Galchenyuk is one of the three legitimate star-level talents in the draft and is much more gifted than Forsberg or Teravainen and therefore I'm willing to swallow the risk for the significant difference in upside. I don't think it is likely Galchenyuk would have fallen off so that's why I don't drop him out of the top 10, as he is an immensely talented all-around player who works his tail off, but the risk is the very real chance it could have happened." - Corey Pronman, Hockey Prospectus

Most importantly, Galchenyuk returned from injury with two games remaining in this year’s regular season, and played all six of Sarnia’s playoff games, registering two goals and two assists. According to those that watched him, Alex seemed back on top of his game, a great sign for interested teams. Participating in the NHL combine, he also recorded the highest peak power output (15.6 watts/kg) of all prospects in the Anaerobic Fitness Test, measuring how explosive of a skater one is; this backs up his claim that his knee is now 100% healed.

At 6’1’’, 190 pounds (according to Future Considerations), Galchenyuk isn’t the largest specimen around, but he is on pace to grow into a decently sized franchise centre.

"He has a good frame on him and was hard to knock off the puck last season. He’s used this season, while not on the ice, to build up his upper body strength. He utilizes his quick, skilled hands to make highlight reel plays by beating defenders to the net. He has strong positioning and a good reach to protect the puck. Naturally he is more of a playmaker than a finisher, as his vision is off the charts and he can accurately hit a moving target through legs and sticks. He’s at his best when he drives the net with the puck—defenders not only need to watch out for his physical presence barrelling at them, but also his skill to make a deke and his ability to dish the puck to an open teammate at any second. Alex has that rare ability to slow the game down, make decisions and execute plays before defenders have a chance to read and react. He has a very accurate shot that has a good release, but he needs to utilize it more often. He looks very smooth with the puck and will be an impact NHLer in a couple seasons." - Future Considerations Draft Guide

All in all, this sounds like a guy who, although bearing some risk, could be the franchise centre this team has been looking for since the glory days. Considering the draft’s supposed lack of top-end depth outside of the top three or four forwards and top four or five defensemen, it is key that the Habs use their pick to select Galchenyuk, or even trade up a spot to ensure that they get him. Standing idly by while Brian Burke takes advantage of incompetent Columbus or Edmonton management would be, for Bergevin, a far bigger mistake than choosing Therrien as head coach ever was. This selection will set the tone for the success or failure of the organization for the next decade, and that is why it is crucial Trevor Timmins and Bergevin get this pick right. If it were I, the choice would be obvious. He may break Canadian hearts while playing for America at the Olympics for years to come, but hopefully Alex Galchenyuk will help the Canadiens to their next Stanley Cup.