The top pick in the 2003 NHL Entry Draft originally belonged to the Florida Panthers. The Panthers finished the 2002-03 season in 27th place, but then GM Rick Dudley had something of a rabbit's foot back then when it came to the draft lottery. It was the second straight year he won the lottery despite finishing 28th place in 01-02 and 27th in 02-03, and for the second straight year, he dealt the pick thinking he was going to select the best player despite moving down to 3rd overall again. In Dudley's mind, Nathan Horton was the best prospect, and Jay Bouwmeester was the best prospect in 2002. Both years, he was wrong, but at least he didn't trade up to make the wrong choice like the Pittsburgh Penguins did.

The Penguins sent Dudley's Panthers useful winger Mikael Samuelsson (who was earlier that year part of the return for Alex Kovalev who had been traded to the Rangers), the 55th pick in 2003 (2nd round), as well as the 3rd pick for the 1st pick and the 73rd pick in 2003 (3rd round). Now, the fact that Samuelsson didn't really pan out for Florida and that the Penguins hit with their 73rd pick (Daniel Carcillo) while the Panthers missed with the 55th (Stefan Meyer) shouldn't cloud your judgement on this move, it was a bottom feeder trading a useful forward to pick a goalie first overall as well as take an 18 spot drop in draft selections later. Picking a goalie in the first round is always a huge gamble, and picking one first overall had only happened once before, in 2000 when Mad Mike Milbury picked Rick DiPietro when he had Roberto Luongo in his system already. The 28th ranked Penguins picked Marc-Andre Fleury, and while he remains part of a very successful team he has never reached the heights justified by this selection. The Penguins' turnaround was much more attributable to their next three high selections in 2004-06 rather than this 2003 pick. The Penguins would finish last in 2003-04 and it wasn't even close.

So why did the Penguins make the trade? Dudley was willing to trade down even further than 3rd overall and pass on Horton if need be and pick up one of the other great prospects if someone wanted to overpay. Penguins GM Craig Patrick was likely worried one of the other teams would move up and take Fleury, who they (and several other teams) highly coveted. The Hurricanes were known to like Eric Staal and while I'm not sure if they made an offer to protect against his selection all three teams (Florida, Carolina, Pittsburgh) were happy that the deal that was made gave each of their teams the top pick on their draft board. Carolina did nothing but in the end won the day on that front at least. Eric Staal has had the best career to date of any player taken in the 2003 Draft. But he didn't deliver the most value before becoming an unrestricted free agent. That honour belongs to an unheralded defensemen playing for the Kelowna Rockets.

Shea Weber was far from a top prospect back in June 2003. He wasn't amongst the twenty prospects who had their picture taken with the Calder Trophy in the introduction article, and NHL Central Scouting had him ranked way down as the 42nd North American ranked skater. Even the team that picked him selected two players ahead of him, both of whom were also defensemen (Ryan Suter and Kevin Klein). In the end, though, it appears no one delivered more value as a draft pick than Weber has for the Nashville Predators. It's kind of funny, Nashville was the host team for the 2003 NHL Entry Draft, and yet the player that the home crowd cheered the most for, while very good, wasn't the best guy they'd even take that year.

Over the past two years, Weber has taken the step from a top pairing defenseman to an elite one, and could be taking home his first Norris Trophy next Tuesday in Las Vegas. After the jump, we'll look at his career progression and why exactly he's the top pick in this re-draft: 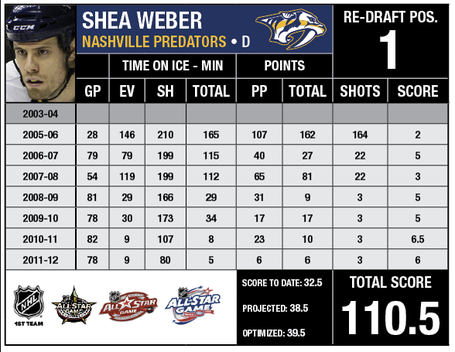 Editor's Note: The stats shown above indicate league rank (defensemen only) in each category except GP (Games Played) and Score. Score is defined in the introduction, on a scale of 0.5 to 6 with bonus half points given for end of season awards received.

As you can see by his career progression, Weber was never thrust into the role of a top defenseman right away. While I gave him a top pairing defenseman score for 2006-07, that was driven by his offensive production. Weber's shot has always been elite, but the defensive responsibilities were carefully developed, not fully embracing an all-around defending role until he was 23. Since then, his offensive production has improved, but more importantly his defensive results have jumped considerably. He's a regular on the PK now (though he still gets a small breather by being used on the 2nd unit), and his QCOMP and GA/60 measures also improved notably over the five year period they were recorded.

Because of how careful Nashville was in bringing him along, and the fact that he had a late birthday (August 14, 1985), he is one of just a handful of 2003 draft picks that has yet to fulfill all the qualifications for being an unrestricted free agent. As a result, we have to make a projection as to what his value will be for next year, and based on the past two seasons where he was a Norris Finalist in each year, we're safely assuming he will score a 6 again next year, although injury could always mess that up. That is why his projected score differs from his score to date. His optimized score is the score assuming he will win the Norris and be a 1st or 2nd team NHL All-Star, which are each worth a half point as bonus, and would bring his score for 2011-12 up to a 7.

Whether or not he wins the Norris this year, Shea Weber has earned this draft ranking. His value to his team is rivalled in the class of 2003, but not surpassed.