Share All sharing options for: You are... Not the coach! 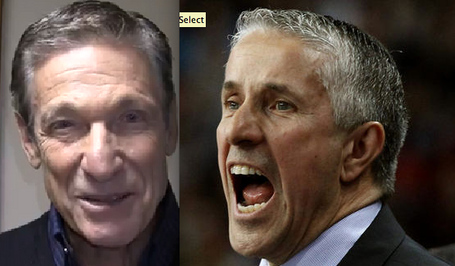 Earlier today we found out that Bob Hartley, rumoured to have "already been hired" by the Montreal Canadiens, will be coaching the Calgary Flames next season.

Despite some controversial comments regarding Carey Price when Hartley worked as an analyst for RDS, he was the leading name in a very thin field this summer. His shelf life as a coach may be short, but he has won a championship in every league he's coached in.

The general feeling in the media is that Marc Bergevin is looking for an experienced coach, and preferably one who speaks the native tongue. Bob McKenzie was bold enough to state that the job was down to Habs retread Michel Therrien, and under-heavy-litigation Marc Crawford.

After the management turnover this summer, fans and media alike rejoiced that the team would be turning over a new leaf, and neither Crawford nor Therrien would be much of a progressive choice. Nor do either of them strike anyone as great candidates to lead a team to a Stanley Cup.

Oddly enough, Crawford doesn't even speak fluent French, prompting Pierre McGuire to assure Mitch Melnick on TSN990 a few weeks ago that Crawford is willing to sign up for French courses. That begs the question; if McKenzie is right, why isn't the field open to other English candidates who are willing to learn the language?

Both candidates listed by McKenzie are devoid of any major success without stacked lineups, something the Canadiens don't currently have. Neither coach is known as an innovator or modern in their approach to the game either, although Crawford may have been considered innovative when he was hired by the Nordiques in 1994.

Both candidates also come with their fare share of baggage.

Michel Therrien has already coached the Canadiens once, and not that long ago. Most organizations will not hire a retread, and Montreal being more traditional than most, this is even less likely in most cases. Not only that, but Therrien had the poorest record with the Habs of all the coaches since before Alain Vigneault; his best season being only 36 wins. That's only 5 wins more than the disaster zone that was Randy Cunneyworth's season. Therrien also has the habit of imploding on camera, hilarious to watch, but completely unprofessional and a great way to lose the respect of the team you're coaching.

Marc Crawford is slightly more dignified in front of the cameras, but not by much. He's also currently still under heavy litigation for his involvement in Todd Bertuzzi's assault on Steve Moore. To think that this continuing legal trouble wouldn't turn into a media circus in Montreal is incredibly naive. There's also the issue that Crawford has missed the playoffs the last 5 straight seasons he's coached, and even with very strong teams in Colorado and Vancouver, he hasn't made it out of the second round since 1997. Even though his final season in Dallas looked impressive on the surface, with a .579 points percentage, Dallas was actually the 7th worst Fenwick Tied team in the NHL, and the 8th worst Fenwick Close team. Dallas had actually gotten worse in both measures from the year before, actively becoming worse under Crawford's tutelage.

These two are not what the Canadiens need. If Bob McKenzie is telling it true, and I don't believe him to be one who reports on things he's not sure about, Marc Bergevin must expand the search.

Hiring an unknown is a better option than hiring those who we can confirm are inadequate.