Who's Better To Build A Team Around: Pacioretty vs Kessel

Share All sharing options for: Who's Better To Build A Team Around: Pacioretty vs Kessel 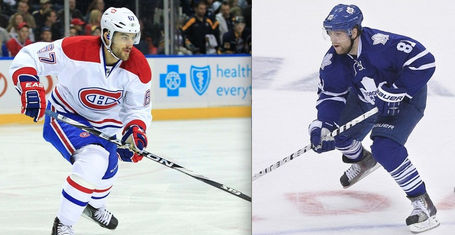 A couple weeks ago I was talking with Pension Plan Puppets contributor Stephen Burtch on twitter and he stated that he felt the Habs weren't in a good position moving forward because no one scored more than 65 points on the team this year. After pointing out that the Stanley Cup winning Bruins of 2010-11 didn't have a 65 point scorer, and only two 60 point scorers to the 28th place Habs three, he didn't relent. However I had a feeling that despite Burtch's criticism, Pacioretty's point totals this year were misleading. Basically after watching both players all year and diving into advanced stats, I felt Pacioretty at 65 points was actually better than Kessel at 82.

Before Habs fans scream "Kessel sucks!" or Leafs fans say "Kessel is WAY better!", Stop for a second and hold your biases at the door. Both players have strengths and weaknesses that will play into this comparison. It's a complicated question. Max Pacioretty has the advantage of being a year younger than Kessel, but Phil Kessel has four straight 30 goal seasons to Max's one. Both are great players and this isn't a Kessel hit piece.

Outside of statistics, there is a key difference between the two left wingers. Pacioretty is a bigger player than Kessel, and much more physical. Kessel is more creative and Pacioretty is more brute force. Which one is better long term is up for debate.

So who's going to be better moving forward? This was Pacioretty's breakout year if we're going to use full seasons, his last attempt at becoming an impact player was cut short by a guy who somehow still has a clean suspension record. What should work best as a comparison base will be to use this season for Pacioretty and compare it to Kessel's numbers at the same age (23). I'm going to include Kessel's numbers from this year as well just to add another layer of comparison.

If you have questions about the terms being used, please refer to the new glossary.

Statistics are at even strength unless otherwise indicated. All statistics are from behindthenet.ca and NHL.com

Right away there are some major differences. Kessel is more heavily relied upon by the Leafs than Pacioretty is for the Canadiens.

Kessel plays against marginally tougher opponents, but Pacioretty has marginally tougher zone starts. Perhaps due to the weaker competition, Pacioretty also finishes his shifts in the offensive zone more often. Oddly enough, Kessel faced tougher competition and tougher zone starts as a 23 year old than he did at 24, which may explain some of his jump in production this year. He also didn't suffer from poor shooting luck this year like he did last season.

Kessel is twice as disciplined as Pacioretty, although Max draws enough penalties that this is mostly mitigated in the actual penalty differential.

Per 60 minutes, Pacioretty is again ahead of Kessel at even strength. Kessel outshot Pacioretty as a 23 year old, but over the last two years Pacioretty still comes out ahead. Max also scored significantly more per 60 minutes than Kessel has, while outpointing him per 60 marginally in Kessel's 24 year old year.

The one major quibble in anointing Pacioretty as superior to Kessel going forward is the quality of the teammates that Pacioretty has played with in comparison to Kessel. Not only are Pacioretty's teammates superior possession players to Kessel's but they were also better in the relative +/- statistic of traditional quality of competition.

Looking at the players each of the two lined up with most often in the samples I'm using here, it's clear that Kessel is at a disadvantage.

In 2010-11 Kessel had the following top 5 linemates according to Behind the Net:

Clearly Pacioretty benefits from more consistent linemates, and better linemates on top of that. There's no question in my mind that Kessel carries his forward line offensively, but Pacioretty's situation is less clear because Cole was nearly just as excellent this year. The question then becomes, are Kessel's inferior linemates enough to bridge the possession and production gap between the players? I don't think we can determine this with the information available, but it will be interesting to see who is better next season.

No matter what the result, these are two really impressive players.