It's hard to predict how a prospect from the AHL will produce in the NHL, but with a little math, could we find something worthwhile?

Share All sharing options for: AHL to NHL Shot Translations

Amongst the stat-head brain trust and regular commentariat here at EOTP this season there has been a re-occurring topic of discussion of Louis Leblanc's shots per game rate at the AHL level, as it was very high relative to his peers for a player whose surface AHL statistics were decent but unremarkable. This has lead to a question that, to the best of my knowledge, has never been asked by the internet advanced hockey stat community: What significance do AHL shot rates have for predicting NHL performance. The relative constancy of shot production rates and the transiency of shooting percentage has long been established at the NHL level. Likewise the question of how AHL scoring translates to the NHL has been fairly extensively covered, starting with Gabe Desjardins ' simple AHL to NHL equivalency (multiply AHL scoring by .44) to Robert Vollman's more extensive look at the factor of age in translation http://www.puckprospectus.com/article.php?articleid=1079, or refinements in splitting even strength from other scoring when making comparisons.

The idea that AHL shot rate may be relevant was encouraged by looking at Max Pacioretty, whose AHL and NHL rates tracked closely and whose NHL scoring explosion was presaged by his Ovechkin-like (5+ per game) shooting dominance in his final AHL half season.

With all this in mind, I attempted to discover the answer to this little asked and unanswered question for the hockey "fancy stats" community: Does a player's AHL shot rate matter for NHL play and if so, what is the relationship between the two?

To come up with an answer, I decided to look at the shots per game rates of players that had made the transition from the AHL to the NHL after the 2004 lockout. This conforms the study to the relatively heavier studied post-lockout NHL era and coincides with the period over which the AHL has tracked individual shot data for their players. Players were selected from the pool of forwards that were active in the 2011-12 NHL season. As a criteria for selection, players must have played more than 25 games in both leagues post-lockout which lead to a data set of 113 players to study. For players who simply played in the AHL one year and the NHL the next, the shot rate is compared from both seasons. For players who played in both leagues in one season in their transition from AHL to NHL, transition seasons under 20 games are ignored and two seasons compared as if they played in one league one year and the other the next. For the more complicated players that had multiple consecutive seasons of playing significant (10+) games in both leagues, the results from each season in the separate leagues are added together as if they were one season each and compared against each other.

This technique results in a database of 113 players with an AHL and NHL shots per game rate. The data graphed results in the following chart: 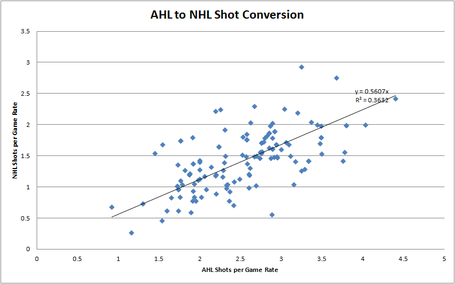 The results follow a nice linear pattern, albeit with large variance. From the trend line we can see that the relationship between two rates breaks down to AHL shot rates converting into the NHL rate multiplied by .5607, or in other terms, on average ~56% of an AHL player's shot rate is maintained in the transition to the higher league. From our R squared value we can say that a player's AHL shot is 0.36 predictive of his NHL rate. This indicates that there is a notable relationship between the two values but the AHL rate is far from being the sole dominating factor in NHL shot production. This makes sense, as a player's talents will be a major factor in how he fares in each league but ice-time, special teams usage and especially linemates since AHL graduates rarely are the "drivers of play" on their lines in their rookie seasons, in each league are bound to be major influences.

Using the same data set to look at the other component of goal scoring, shooting percentage, we'll examine if that notoriously fickle element in NHL goal scoring remains as such in the transition across leagues:

As you can see, shooting percentage has a far weaker relationship in the year to year transition across leagues. On average players in the NHL shoot at .79 the rate as they did in the AHL, but there is very little correlation for individuals between how they shot in one league in one year as opposed to in the other league in the next. A finding largely in line with studies on shooting percentage at the NHL level. Multiplying .56 by .79, we get .44, or exactly the currently understood NHL equivalence for points scoring in the AHL as the NHL, which indicates that there should be no gross errors in the calculated AHL to NHL relationships and that goal scoring is equivalent to point scoring for the transitions between the two leagues.

How does the player who inspired this interest fare by our results? Leblanc's 112 shots in 31 games puts the youngster in pretty good position. Only 6 NHL players out-paced Leblanc's AHL shot rate. Drew Stafford, Brad Marchand, Dustin Penner, P.A. Parenteau, Ryan Callahan, and Dustin Jeffery. 5 of 6 went on to be top six forwards in the NHL and half of whom (Penner, Parenteau and Jeffrey) had their seasons at an older age than Leblanc. While this does not look as a guarantee of NHL scoring success, it's nonetheless an encouraging sign for the 2009 1st rounder. These results predict that Leblanc will be a 2.03 shots per game shooter next year if he plays in the NHL. This, combined with a tendency to shoot ~10% in the QMJHL, AHL and NHL so far in his career, would put him in the ballpark of last year's Carl Hagelin, Vinny Prospal, Derek Stepan, Sam Gagner and Benn Ferriero as a goal scorer in 2012-13 and result in a ~16 goals per 82 games pace for the young forward.

Using these results I have ranked some of the top present AHL forward prospects for their projected NHL shot rate next year, which will be an interesting table to look back at in a years time.

Anaheim's Palmieri certainly looks good by this measure. He'd be a good bet for a breakout goal scorer next season. 20 goals look to be in reach for the 2009 pick. Joe Colborne's slow rate of shot production provides a handy explanation for why his percentage based scoring binge to start the season was not maintained and how he was over-hyped in Leaf-land as a result. Magnus Paajarvi had brutal shooting percentages in both Edmonton and Oklahoma, which explains how such a highly regarded prospect managed to bomb in goal scoring this year.

An interesting follow up to this study would be to look at the translation of goaltender's save percentage from AHL to NHL, which would give some insight into the gap between average AHL and average NHL goaltender quality. This study implies that an NHL goaltender will allow goals on about 80% of the shots an average AHL goaltender would against the same shooters and it would be interesting to see if this can entirely be explained by the difference in AHL vs NHL goaltending or if opposing defenses are also an important factor.