Share All sharing options for: Recalling The Rocket's Greatest Goal

On April 8, 1952, Maurice Richard scored what is arguably the greatest goal of his storied NHL career. It was Game Seven of the Stanley Cup Semi-Final. The second-place Montreal Canadiens were heavy favorites over the fourth-place finisher, the Boston Bruins, and were expected to cruise into the final round.

The Bruins, however, had other plans in mind. The Canadiens took the first two games, in the safe confines of the Montreal Forum, with convincing 5-1 and 4-0 victories. It seemed like the Habs were well on their way to a date in the Stanley Cup Final.

Boston rallied back with a pair of victories of their own at the Boston Garden, before stunning the Habs in Montreal with a 1-0 win in Game Five. Jack McIntyre provided the lone goal at 3:30 of the third period, and "Sugar" Jim Henry stopped 31 Canadiens shots in front of a shocked Forum crowd. Boston was headed home with a 3-2 series lead.

Game Six would be an enduring double-overtime game, in which Canadiens coach Dick Irvin prophesied would require the Canadiens to play the greatest game in the history of the NHL. It was exactly that; a physical game that took its toll on everyone, including Irvin who caught a puck off the stick of Bruins legend Milt Schmidt, and required several stitches. Richard suffered a bruised knee, and defenseman Emile "Butch" Bouchard suffered a charley horse.

The Bruins held a two-goal lead in the deciding game, following the first period of play. Montreal responded on a goal by rookie Eddie Mazur in the second to get within one.

At the eight-minute mark of the third period, Bruins goaltender Henry suffered a fractured nose when a Doug Harvey shot caught him square in the face. The game was delayed for 17 minutes, as he was treated in the first aid room and returned to the game, Henry's eyes were extremely puffy and swollen, and the netminder struggled at times to manage the puck with his impeded vision the remainder of the game.

Just minutes later the Rocket tied it up at 11:05. Having been held in check most of the night, Richard recovered a loose puck, off the stick of Schmidt, raced up ice and blasted a 30-foot shot past a screened and disabled Henry.

The game ended on a goal from Paul Masnick, who had just been called up from Cincinnati to play in the game. Masnick found a loose rebound, off a Harvey shot, in front of Henry to send the series back to Montreal.

Those who watched the game live at the Garden, or listening on radio, would have to wonder how that game could be topped. Well, it would be.

The 1951-52 season had been a difficult one for Maurice Richard. Marred with injuries, capped off with a groin injury that was expected to keep him out the remainder of the season, he played just 48 of the Canadiens' 70 regular season games. He still remained a feared scorer with 27 goals, and was clearly ready for the playoffs. The knee injury he suffered in Game Six was not going to keep him off the ice. Nor would what was to come.

The Forum fans got their cheers in early as Mazur scored his second goal in two games to give the Canadiens the lead at 4:25 of the first period in the deciding game. Ed Sandford would reply for the Bruins just eight minutes later.

Henry, who used a series of hot and cold compresses that afternoon to keep his swollen eyes open, and Canadiens goalie Gerry McNeil kept their opponents at bay during the second period, but the middle stanza was not without incident.

Early on in the period, Richard was on one of his famous rushes up the ice, and cutting around Bruins defenceman Hal Laycoe. As Richard moved around Laycoe, he didn't see Leo Labine appear behind his Bruins teammate until the last second . Labine was a solid defender and he planted his shoulder heavily into the chest of the Habs winger as he tried to jump between the two defenders. Richard took a stick to the face, and his head bounced off the knee of one of the two Bruins rearguards before striking the ice.

Forum fans stood and watched as Richard lay bleeding from the forehead and unconscious. Ushers ran out with a stretcher, but were sent away by team doctor Gordon Young. "You don't know his guy," Gordon said. 'He'd have to be dead to allow himself to be carried off like that."

Young got Richard back to consciousness, and his teammates helped him back to the first aid room. Richard again lost consciousness while the doctor stitched him up. By the time Richard was alert again, the third period was well under way. Against his doctor's advice, and in an era where concussions were less of a concern for players over risking losing the chance to play, Richard found his way back to the bench much to the glee of the Habs faithful in attendance.

Blood still trickled through his bandages as coach Irvin stopped him. "He told me he was alright, but he wasn't just then," Irvin said following the game. "He didn't even know the score of the game." Richard's linemate, Elmer Lach, got him up to speed: still 1-1 with just over four minutes left in the period. It was all Richard needed to know. "I caught Rocket squinting up at the clock and asked him what was the matter," Lach said. "He told me his eyes weren't in focus but just then it was time for a line change and over we went."

With the two teams playing four-on-four, The Rocket, Lach, and Bert Olmstead jumped over the boards and headed towards the Canadiens end of the ice. Emile Bouchard had recovered the puck for Montreal, and made the pass to Richard, who zipped past a pair of Bruins forwards, eluding a Schmidt poke check. Only the Boston defence of Bill Quackenbush, Bob Armstrong and Henry remained in his way. Quackenbush tried to press his opponent towards the corner, but Richard slipped past him, pushing him off with one arm as he had done many times before, and headed to the net. Richard faked a shot, drawing Henry to his left post and skated by him, firing the puck into the far corner. 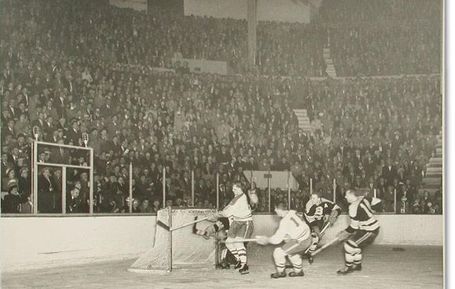 The crowd roared as the Canadiens took the lead. "My legs were alright, but I was dizzy," Richard said. "I heard the crowd yell, and by that time I was too dizzy to see."

Hal Laycoe, who witnessed the earlier collision between Richard and Labine, heard the roar of the crowd but missed seeing the goal itself. It was Laycoe who had been serving the Boston penalty at the time and was being stitched up himself, following an altercation with Billy Reay. "They fixed [Reay] first, so he went out," Laycoe said. "Then I heard the roar, and that was it.

"I don't think [Richard] had ever been upended that violently and it was amazing that he could come back after something like that and score the kind of goal he did. He was gone after that for most of the game but came back and scored the damn goal that beat us." 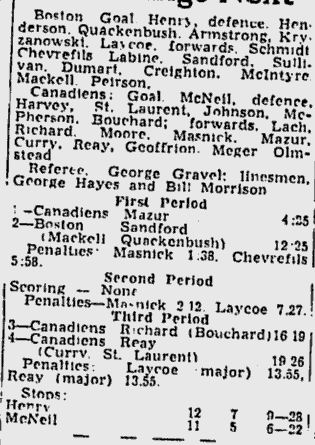 Reay scored an empty net goal to seal the game, and the series, for the Canadiens.

As vicious as the seven-game encounter had been, the opposing players congratulated each other on a hard fought series. Milt Schmidt had his arm around Canadiens rookie Dickie Moore, whom he battled throughout the series, and the players all shook hands. The most memorable handshake came between Richard and Henry, who almost appeared to be bowing to the Rocket as he struggled to hang onto his goalie gear.

"I felt bad of course because he had just eliminated us from the playoffs but I had to congratulate the Rocket because it was one of the greatest goals I had ever seen and it was no shame being beat by such a player," Henry said years later. "Rocket Richard filled the stadiums wherever he went in those days with the fans coming out to either boo or cheer him."

Battered and scarred, the Canadiens would prove to be no match in the Stanley Cup Final for the well-rested Detroit Red Wings, who had swept the Toronto Maple Leafs in four games. The Wings would clinch the Stanley Cup in another sweep, despite Irvin's prediction of a six-game Canadiens victory by April 19.

Sources for this article