The Last Hurrah: #Habs #Leafs Close Out Their Season

Share All sharing options for: The Last Hurrah: #Habs #Leafs Close Out Their Season

Yes, the Toronto Maple Leafs will finish ahead of the Montreal Canadiens, but after tonight they are essentially both on the same page, done for the season and will await the results of Tuesday's Draft Lottery.

What does remain is pride for Habs fans. A regulation win tonight, and the Canadiens can take the season series against Toronto with a 3-2-1 record, the Leafs, and their fans, looking from there end would be 3-3. It would be a small victory for the Habs, in a season that has been a SNAFU from day one.

The ones to watch in the Blue and White are ex-Hab Mikhail Grabovski, who has 10 percent of his season point total (50) against the Canadiens, and captain Dion Phaneuf. Despite the calls to run him out of town by many Toronto fans and media, Phaneuf too has five points against Montreal.

Grabovski is questionable, along with goalie Jonas Gustavsson for tonight's game. Both have lower body injuries. 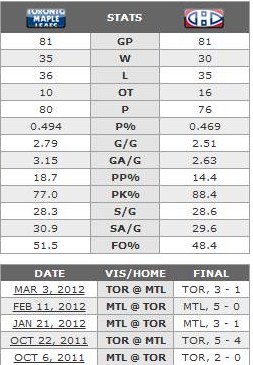