Game Thread: Habs Look To Clinch Last Place In The East Against The Lightning

Share All sharing options for: Game Thread: Habs Look To Clinch Last Place In The East Against The Lightning

The Montreal Canadiens kicked off the day by announcing officially that Carey Price is done for the year with a 'mild' concussion as diagnosed by Dr. Mulder, which means Peter Budaj will be the man between the pipes tonight and possibly all three remaining games.

However the Canadiens kick off a back to back tonight against teams that hired two former coaches from within the organization, and the back to back includes travel, so there's a slight chance that recently called up Robert Mayer may get the start tomorrow in Carolina.

Budaj get's the Tampa Bay Lightning tonight however. Budaj has recorded a .923 save percentage in his last 3 games but his team hasn't been able to eek out a win for him.

According to Renaud Lavoie, Ryan White may also be suffering from a concussion after his fight with Erik Gudbranson. I said at the time of the fight that White needs to learn to pick his battles, hopefully he does so in the future because he's a solid depth player.

Pint sized pest Gabriel Dumont has been called up to take White's lineup spot after Petteri Nokelainen also went down with injury last game. Dumont acquitted himself well in training camp this year but has struggled to produce in the AHL with just 22 points in 55 games and a -14 rating.

Somehow J.T. Wyman is the leading scorer for the Lightning against the Canadiens with 3 points and a +3 rating in 2 games, while David Desharnais has been the player to hound the Lightning with 4 points in 3 games. 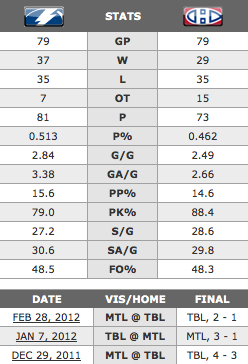 SB Nation brothers for the Lightning at Raw Charge