Is it time for Luongo to go?

Share All sharing options for: Is it time for Luongo to go? 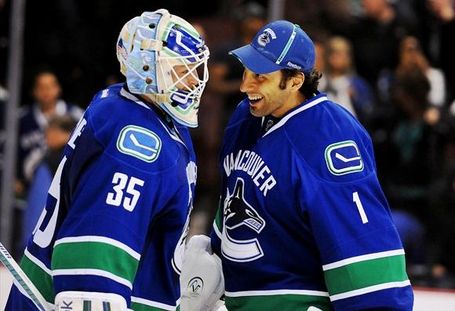 I know there are certain factors that may make moving Roberto Luongo difficult for the Canucks, but would it be the correct move? With all factors remaining equal (ie. health, contract, Luongo's approval etc.), should the Canucks deal Cory Schneider or Luongo?

I do not follow the Canucks with the same intensity in which I tracked the Carey Price/Jaroslav Halak battle, but I maintain the same type of attitude. I would keep the player with the higher upside and whose peak is still ahead of him. Luongo is 33 years old and his performance on the surface seems to have remained fairly consistent, but the 24 year old Luongo was putting up massive numbers on a poor and very flawed Florida Panthers team, not the dominant defensively sound Vancouver Canucks.

I view my goaltenders with the pre and after Roy designation. Roy changed the game for goaltenders and with every 5-6 seasons we see a new improved version. Luongo was generation 1.0. The first time I remember seeing the footwork dominating todays game was Theodore, who was a 1.0 as well. Luongo was able to dominate the pre-lockout NHL based on his size and athleticism, but his numbers have begun to decline with age and the increased lateral movement in the NHL today.

Carey Price was the 2.0 model and most NHL goaltenders now have explosive lateral ability based on strong footwork. A guy like Marc Andre Fleury is explosive, but he tends to overplay and chase the play. Schneider represents the 2.0 model and when you factor in age and technique is an upgrade on Luongo. I also don't see him chasing the play like Fleury or Jimmy Howard here. 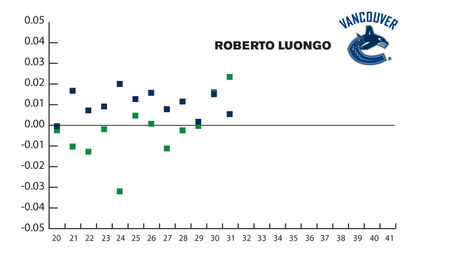 I by no means blame Luongo for the Canucks failures, but he is showing signs of slipping and the days of him dominating the opposition are over. Cory Schneider is just entering the age where goaltenders begin to peak. The number I came up with in my defense of Gauthier keeping Price came up with 25-30. 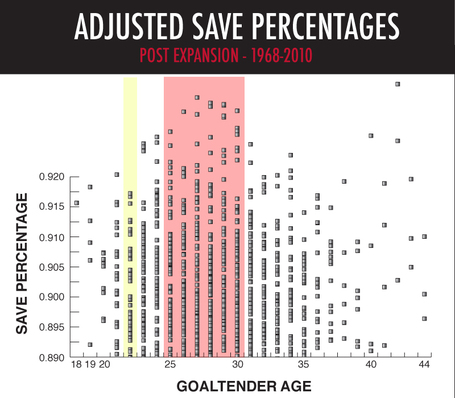 If you look at the age 33+ the outliers are few and far between. Great players like Roy showed signficant decline between those ages, where even Captain Snow Angel David Aebischer was closely matching his numbers. 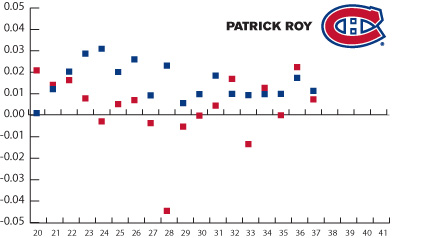 It isn't often when the easy decision matches up with the fanbases popular decision. I think the Canucks should attempt to rid themselves of the Luongo contract and run with the 2.0 version during his career peak.

The risks outweigh the rewards. Good leadership involves taking the risk and making the move a season early and not waiting for clear evidence a season late.