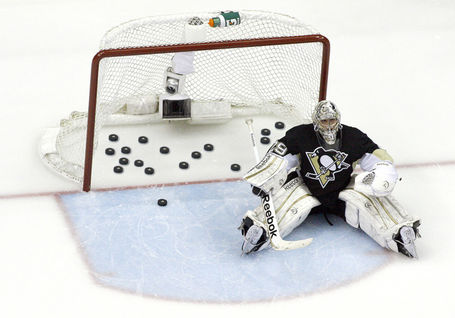 One of the biggest chasms between traditional hockey coverage and advanced analytics is the art of storytelling. The media has always been trusted with the responsibility of setting the narrative and with it, crafting history. When a six year old sat in their living room in the 50's, they imagined their heroes as 9 foot giants, their minds were an empty canvas, available to be coloured by the reporters of the time.

Unfortunately, the lack of access blinded everybody to the fact that the reporters were not a collection of artists like Van Gogh, da Vinci or Monet, but an army of Bob Ross' painting over a set template. For some reason as access increased through the invention of the TV, VCRs and NHL Gamecenter, the same beliefs and myth making have held true. Fans love to pass down stories from generation to generation. They don't care about perspective or truth, they prefer their childhood heroes to remain giants of the game and because of this are open to fighting those who would suggest the world is round, not flat.

The Bob Ross template is so rigid that it seems every generation has their goaltender who somehow weasels his way into or close to the Hall of Fame without really earning it. A goaltender who drafts off the wake of their teammates to ultimate glory.

Well, it is pretty hard to lose when your first line center scores 215 points. The fact that this has remained a sacred cow for generations is absurd.

Roberto Luongo in 2007 had a .941 SV% and a 1.77 GAA before being eliminated by the eventual Cup champion Ducks. The Canucks scored 8 goals in five games for him and he somehow dragged them to 3 OT games. He was tagged as a goaltender who hasn't done it when it matters.

Ilya Bryzgalov has given up 12 goals in three games and has an .868 SV% and a 3.95 GAA and has won three straight. Nobody seems to be talking about his series meltdown.

The reality is, wins are a team based stat and no goaltender without goal support will ever be a winner.

He is a big game goalie. He makes saves when the game is on the line.

This mindset is a close cousin of clutch and lives in the belief that clutch is an ability. Are some players more mentally tough than others, yes. Do they have the ability to dial up an ability to do things beyond their own ability? No.

To believe in something like this would imply that clutch athletes are actually under-performing in non-clutch situations. If clutch was an actual ability, then it could be dialed up at all times and failure would be non-existent unless two clutch athletes faced off. In this case, the one with the greater clutch ability would win.

The narrative that a goaltender buckles down after giving up 5 goals and bars the door once it is tied 5-5 in the third is storytelling at it's finest. If this is to be believed, the understanding must exist that the goaltender has the ability to stop the unstoppable shots and that he abandoned this ability for the first 40 minutes of the game. It also offers a 180 degree turn on the myth of the goaltender making the clutch save when it was 0-0 and in turn is responsible for the victory even though the final ended up 5-1.

These situations imply that a goaltender makes mental judgements on what is and isn't a big game and he determines when it is and isn't important to make a big save.

Ask the average fan if Patrick Roy was a big-game clutch goaltender and you will get a unanimous yes. Roy played in 13 game sevens. His record in those games was 6-7. His SV% was .908. Clutch?

If Patrick Roy and his three Conn Smythe trophies cannot dial up this clutch gene, why does everybody perceive that goaltenders like Grant Fuhr and Marc Andre Fleury have one?

I recently created a post in regards to a goaltenders performance in relation to his era. It plotted individual SV% against the average of the era. I went over the list of all-time wins and applied this to the top 35 goaltenders.

The SV% column represents the actual number accrued and the number that would be registered by an average goaltender playing out his career in the same era. Unfortunately these numbers are filled with noise and do not account for the benefit of playing behind a great defensive team.

Here are the results. (Hall of Famers are marked with an *)

(For Hab fans interested, Price is at a .005 at this point in his career )

Grant Fuhr has dined out on the Oilers dynasty and the clutch gene for two decades. A whole career built upon this selective gene. "Grant Fuhr may give up seven, but he won't give up that eighth" was the prevailing attitude in the 1980's and it got him in to the Hall of Fame and a jersey retirement in Edmonton. In the current era where it is required to finish in the top five in save percentage to qualify for the Vezina, why is this logic rarely questioned?

I will be the first one to talk about the noise that needs to be filtered out in order to find true save percentage, but I can't even come up with a reasonable explanation for Fuhr's statistical career outside of mediocrity. 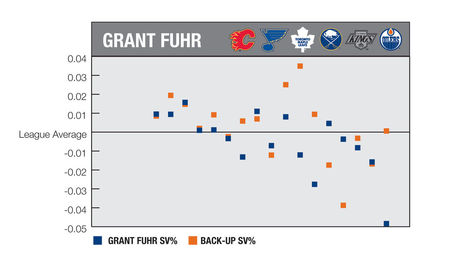 I plotted Fuhr's adjusted SV% against the league average and against his backup. This exercise could be a little unfair to Fuhr because of the quality of his backups (Moog, Ranford, Potvin and Hasek), but the whole point of being elected a Hall of Famer is because you were an all-time great. Your career shouldn't read as average or equal to your backup. In 11 of Fuhr's 17 seasons he finished below or on the Osgood line. During the six seasons in which he surpassed it, he was equaled or bettered by his back-up in four of them. This indicates to me that the inflated SV% was likely the result of a team effect. 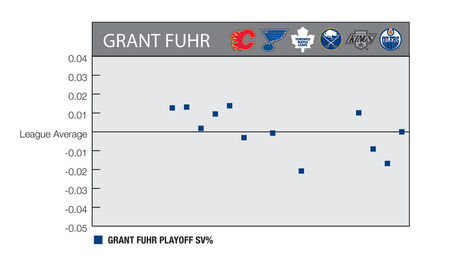 With his reputation as a clutch goaltender, I looked for evidence that he was an elite playoff performer. Plotting out the data points, Fuhr seemed to fair much better. During a five year stretch in the 80s, he delivered substantial playoff numbers that would indicate he was much greater than average. Maybe Fuhr did have the ability to raise the level of his game for the playoffs. 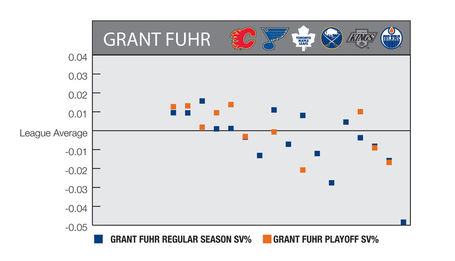 I wanted to see his rate of improvement from regular season to playoffs. His ability to significantly raise his level of play when the games were more important. The clutch gene. During his peak five year period where the Oilers won four cups in five seasons he outperformed his regular season numbers significantly twice, matched it twice and cratered in 1986 when the Oilers failed to win. After that it was essentially a disaster.

Was he clutch in Game Seven's? Fuhr played seven during his career and finished 4 and 3 with an .883 SV%.

Would the Oilers dynasty have suffered had they chosen Moog? Moog went to an inferior Bruins team and took them to two Stanley Cup Finals and a pair of Conference Finals. During Fuhr's suspension, a dominant Oilers team without Gretzky won a Cup with Bill Ranford.

An argument can be made that his peak was Hall of Fame calibre, but you don't get into the Hall of Fame for a strong five year period. Ask Eric Lindros. His career taken as a whole is based upon a five year stretch of clutch goaltending? 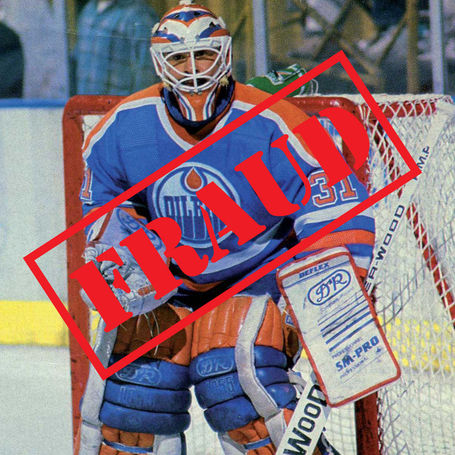 Leading into the playoffs, Puck Daddy went on the BS Report on ESPN and claimed that Marc Andre Fleury would be his goaltender in a must win playoff game. Future Canadiens GM Pierre McGuire (who Mitch Melnick seems to claim is always right) made a case for a Vezina nomination in 2012. I also listened to Scott Burnside claim during the 2010 Olympics that Fleury should be the one Team Canada relied on because he won a Stanley Cup.

History one again repeating itself. As a Canadiens fan and supporter of Carey Price this is exasperating. During the 2010 season the fanbase decided that Carey Price was awful and a bust. His SV% on the season was .912. A number that placed him slightly above the Osgood line and .03 greater than Marc Andre Fleury's CAREER AVERAGE.

So why would Puck Daddy take him in a deciding game in the playoffs? My guess? He wins games and he makes big saves in big games. The clutch gene re-generated in Marc Andre Fleury. 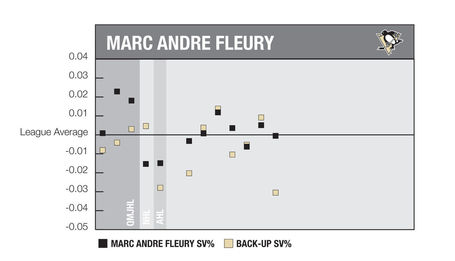 After looking at his NHL numbers, I needed to find something that represented Fleury as an elite goaltender. Many question Fleury's selection at number one overall, but his junior stats are a clear indication as to why he was considered. Whether the Penguins brought him up to soon or not is not my concern, but his career since then has been absolutely Osgoodian. Eight pro seasons. Six of which have hovered around the Osgood line. During three of the four seasons in which he managed to pull himself out of mediocrity, his goaltending partner outshone him. It is like Fuhr re-born without the cocaine problem and giant teeth. 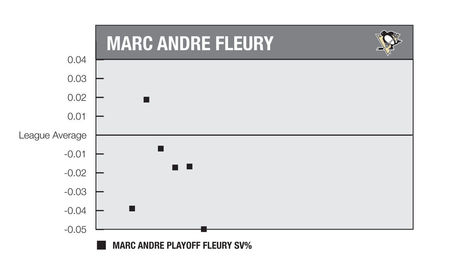 So with limited regular season success, the playoffs are where legends are formed, there must be a collection of brilliant performances to give the perception foundation. Nope.

Six playoff seasons and a career playoff save percentage of .905 in 72 games.

This 2012 meltdown is not a fluke and while everybody is questioning Crosby's leadership, a story of how concussions have changed his demeanour or distracted by one of the most entertaining series in a decades, the simple answer is sitting in the Penguins crease with 17 pucks sitting behind him. If Fleury had offered replacement level goaltending the series would not be 3-0. We would be talking about a pivotal game four. Fleury doesn't possess the clutch gene, he possesses the shit don't stick gene. 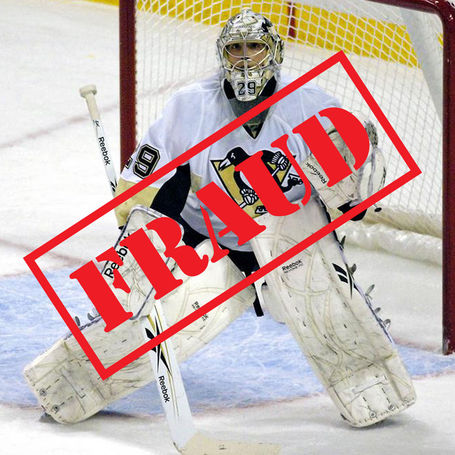 After the 2012 playoffs, I think Fleury has officially crossed over from the Fuhr narrative to the Osgood one. The evidence is so overwhelming and he doesn't have four Cups to shelter him from the barrage of meltdowns. Osgood always presented the biggest hurdle to the Cup storytelling template. The bad goals added to multiple Stanley Cups always short circuited the simple narrative. Osgood is terrible, but he has Cups. Hall of Famer? Conn Smythe?

When in doubt, go for the tangible evidence, don't trust imaginary genes.