It was sad to wake up this morning and learn of the passing of Montreal Canadiens Hall of Fame defenseman Emile "Butch" Bouchard at the age of 92.

Bocuhard arrived with the Canadiens in the 1941-42 season, when the team's rebuilding process was underway.

He was the ideal stay at home rearguard in his NHL career, just predating the puck-moving defenseman era that would be sparked by future teammate Doug Harvey, picking up a Second Team All-Star award in 1944. That was followed by three consecutive First Team All-Star selections. Paired with Ken Reardon, they made life difficult for opposing forwards who entered Montreal's side of the ice.

Butch would deliver punishing hits and was highly skilled at getting that first pass out of the defending zone. In researching various stories on the Canadiens during his tenure, it was more often than not that number 3 was involved in the game-breaking play. Be it digging the puck out of the corner or getting a pass out to the likes of Elmer Lach, Toe Black, Jean Beliveau or Maurine Richard, Bouchard was always there.

He was captain of the Canadiens for eight straight years, then a team record. He was the first Quebec-born captain of the club and the blueprint for Beliveau's captaincy.

Beliveau recalls Bouchard's strength and leadership in his biography,"My Life in Hockey."

"When I joined the Canadiens, Emile "Butch" Bouchard was on his last legs, both at the blue line and as our team captain. I only played with Emile for two years, and in the last year he didn't play all that much.Still he was well respected throughout the league for his strength. One night, a fracas started in Detroit and was right to the Red Wings' bench, opened the door, and chased a player through it - unheard-of behavior then, as now. Nobody on the Detroit team dared do anything, and they certainly had their share of tough customers. The only other defenceman of that era who matched Butch in terms of strength was the late, great Tim Horton.

"As a captain, Butch took great pains to listen to everyone's opinion to any issue, and served as a model for my stint as team captain in the 1960s."

An injury filled 1955-56 injury-filled season forced Bouchard to retire, just as the Canadiens were about to embark on their unprecedented five consecutive Stanley Cups.

He was inducted into the Hockey Hall of Fame in 1966, and has received numerous other accolades that include the Orde of Quebec and the Order of Canada.

An arena in his home town of Longueil, Quebec is named after him, as is thew QMJHL's award for the league's best defenseman.

Bouchard's Number 3 sweater was retired, alongside Elmer Lach's, during the Canadiens Centennial ceremony on December 9, 2009.

Rest in Peace, Mr. Bouchard. More tributes and clips after the jump.

THN's Ken Campbell with a segment on Butch from his book, "Habs Heroes."

From the EOTP archive, Robert Lefebvre on Bouchard, as well as Bouchard and Lach 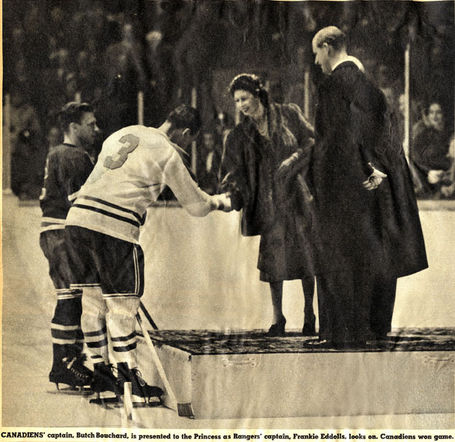 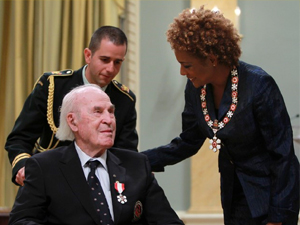 Bouchard receives the Order of Canada in 2010 (Photo: QMI Agency) 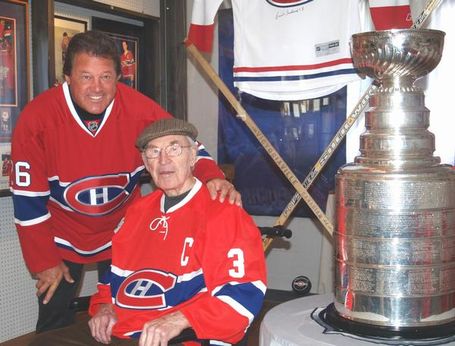