Going over the data, it seems like the 28th overall Montreal Canadiens weren't actually that horrible.

Share All sharing options for: The Best Worst Team in NHL History - The 2011-12 Montreal Canadiens

The connection between having a good goal differential and a good team is pretty well established. Alan Ryder's take on the subject can be perused here, but the long and short of it is that goal differential is a better predictor of future results (from predicting the rest of the season, to playoff series wins and next season) than winning percentage is. The ability to win close games does not appear to be a repeatable skill at the NHL level. This mirrors team behavior in other sports like baseball and soccer.

NHL hockey has a couple of quirks when calculating goal differential that really don't matter for assessing a team. Shootouts wins and losses are counted as goals for or against but true talent in the SO is minimal and the whole thing devolves to a coin flip. Likewise empty net goals count but have very little effect on who wins a game and are much less descriptive than goals generated or lost during normal play.

Applying this knowledge to the 2011-12 NHL season leads to some interesting results for the Eastern Conference.

That the East is a pretty bad conference past its best teams is immediately apparent with a 5 team upper class that dominated and an assortment of weak mid-level through awful teams below them. That Florida's first post-season appearance in 10 years was a fluke run seems immediately apparent. As is the scary talent of Boston (ugh) and Pittsburgh and the complete travesty which is the South East division. Montreal's bottom finish sticks out like a sore thumb here.

By this measure, the East sorts to a standings much closer to those people likely would have predicted at the beginning of the season, with perpetual also-rans like Florida, NYI and TB at the bottom and middle-class teams like Montreal, Buffalo and Ottawa in the middle. Montreal's 6th position being a repeat of the previous season's standings.

The question that immediately occurred to me is whether there has ever been such an incredible disconnect from goal differential and win-loss record at the bottom of the standings in the NHL before. Or in other terms, "has a team this good been this bad before?"

I started my search at 1971 because I wanted to limit the search to the modern NHL and avoid the distorting effects of the unbalance two divisions immediately post-expansion. The shootout is only relevant post 2004. Unfortunately I have no empty net data before 1998 so surface goal differential will have to suffice before then.

A team finishing bottom 5 despite a goal differential of -20 or better is so rare its only happened 5 times in four decades. The only team close to Montreal in this level of misfortune in that time is the 89-90 Philadelphia Flyers. Montreal finished below any of them with a better goal differential. To compare apples to apples you could say they are -7 except for the shootout (Washington -18) which leaves them tied with the Flyers but with a worse result of 28th in 30 teams to 18th in 21 teams. None of these teams lost their conference like Montreal did. If you accept goal differential as valid, Montreal is the best team to finish so poorly in the four decades of the Modern NHL.

Another close comparable is the 92-93 New York Rangers who had a -4 and finished 19th in a 24 team league. They won the Stanley Cup the following year.

If Montreal was so good at goals for and against, how did they finish 15th?

The immediate thing to look at his the shootout, which isn't considered important in this line of thinking and has an immediate effect on standings. To counteract its effect I looked at the standings if they were calculated the old way with no shootout, a point for a tie at the end of OT and 2 for a regular or OT win. This can be done by counting ROW as wins and trips to the SO as ties.

As you can see, the shootout had very little real effect on standing positions this year although it does elevate Montreal over the 14th place Islanders. However going from negative (5-12) to neutral (8.5-8.5) at shootouts would net 3.5 standing points.

So if the shootout is not the culprit how was Montreal in close games?

Montreal's 16-19 record in games decided by 2 or more non-empty net goals is well in line with their goal differential ranking (6th versus 8th). In non-shootout one-goal-games it's 10-20. Assuming equal ability to win one-goal-games (15-15 record) Montreal gains 10 standing points. Which would bring them to 79 points right behind Ottawa for 9th place in our no shootout standing. But because other teams don't remain static, their ranking would improve to the 8th place of the clear victory standings. 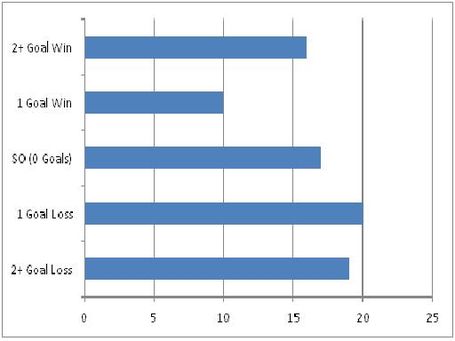 Montreal's inability to win and propensity to lose one-goal-games is starkly illustrated here. Even if they had been proportionate to the clear victories rather than completely even Montreal would have been much better off. Contrast this with their mirror opposite Florida, who won their division and you'll see the only real difference is the inversion of the 1 goal win and one goal loss results. 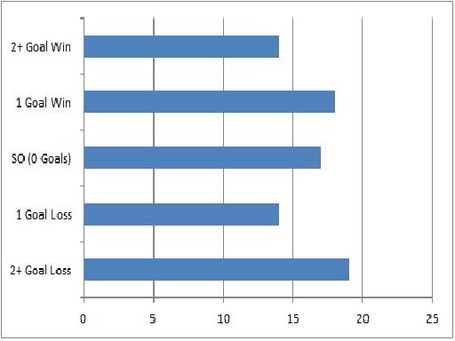 So in terms of difference between goal differential and standings results, one position is due to the shootout, seven are due to a poor record in one-goal-games. More accurately though, 3.5 points are from shootout and 10 from the close games leaving a 13.5 point deficit. 13.5 + 78 would result in 91.5 standing points an effectively right behind Ottawa (92) for 9th place. Montreal apparently did not lose a playoff position due to their own below average shootout and close game record. However equalize other teams records in this respect and they end up in 8th place ahead of Florida.

In other words Montreal being 15th rather than the last playoff seed is 1/4th shootout and 3/4ths play in one-goal-games, neither of which are repeatable team skills at the NHL level.

How did this happen?

In general a hard-luck season can happen at any time in any league, there is a very large gap between theoretical maximum bad luck in goal differential terms (I suppose winning 82-0 in a single game losing the rest of the year by one goal is theoretically possible) but there are two reasons why this is was more likely now than previously.

1. The shootout has added an element of randomness to team results that did not exist before.

2. Greater league parity: Its easier to finish in the bottom when there are no longer -75 goal differential teams sinking towards the bottom of the league. The closer competitors are, the more randomness is a factor.