Patrick Roy vs. his peers

Share All sharing options for: Patrick Roy vs. his peers 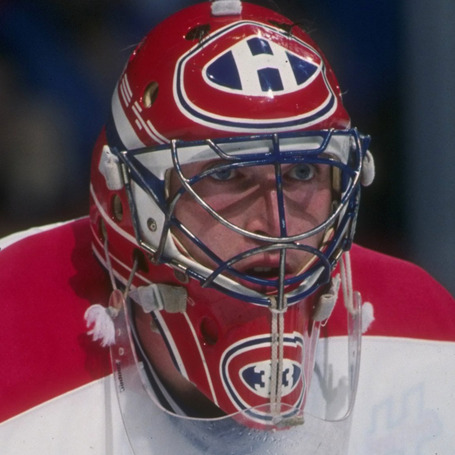 This is just a quick hit in reference to a discussion that took place in the comments section on Andrew's piece today on the Habs and their draft success. If you haven't read it, go read it, then come back and take a look at this.

In the message thread I brought up Roy vs. Brodeur and tried to place the comparison in proper context. A straight up comparison of their SV% favours Brodeur, but when you measure the success against their peers and the era the comparison is altered significantly.

This is a measure of goaltender to peers per season. Patrick Roy's .900 SV% lead the league in 1988, so it isn't fair to offer that as a straight comparable to 2012 where it would place you tied with James Reimer for 68th. 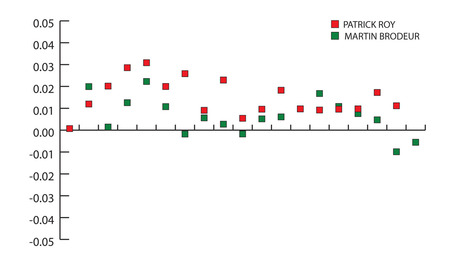 After seeing this, Bruce requested that I toss Hasek into the mix for a comparable. I did, but the graph started to get harder to follow, so I separated Roy from his peers and offered up a look at each individual goaltender regarded as great from that era. 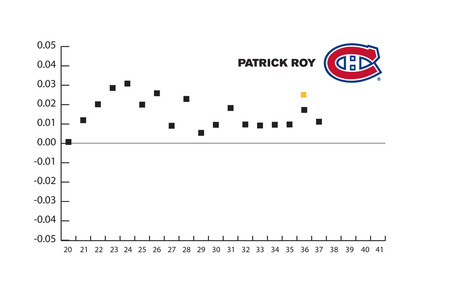 Looking at Roy in regards to the league average (league average is represented by 0), Roy spent his whole career above this line outside of his rookie season. The yellow dot indicates Tim Thomas' RECORD setting season in 2011. As we can see by this chart, Roy outperformed or equaled Thomas' season multiple times and spent close to six seasons in that vicinity. Even his 1993 season which was considered weak was well above league average.

This shows that although Brodeur's numbers are perceived to be better, when the noise is removed it isn't even close. 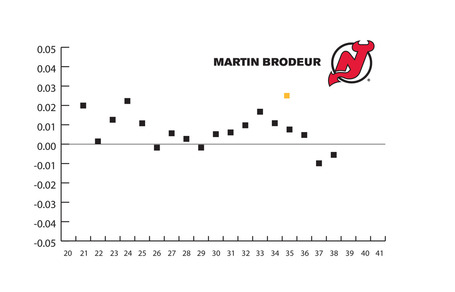 Contrast Brodeur to Roy and you see a goaltender who was below or around replacement level six times in his career. It becomes clear that if you judge a goaltender by SV% that Brodeur is nowhere near Roy's class. 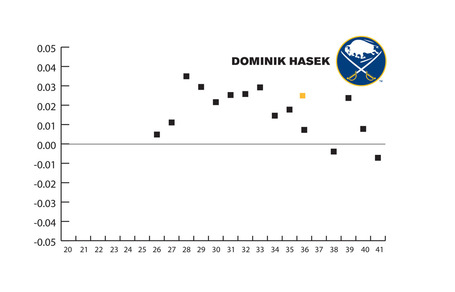 It's a shame that Hasek didn't make his debut in the NHL until he was 26. His prime from 28 to 33 is only matched by Roy's 22 to 26 year olds seasons. He dropped off significantly after the age of 34, but his peak years blow away Thomas' 2011 campaign. 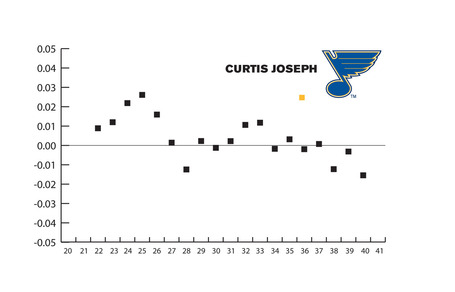 Curtis Joseph's numbers fall off badly after his 26th birthday and pretty much represented average performance for the last 10 years of his career. Joseph was a throwback and suffered badly over the final quarter of his career as his reflexes diminished. 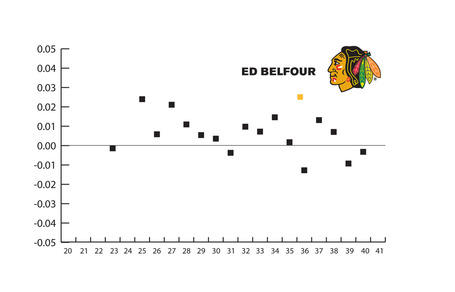 Belfour was one of Roy's main rivals during the 90's, but his dominance was never consistent. It never approach the level of Hasek and Roy. 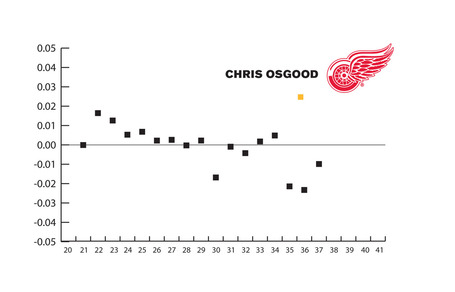 This was included mainly as a joke and to expose every idiot who suggests that Osgood is a Hall of Famer. Proof positive that if you take an average goaltender and place him on a strong team in a dominant system that he can produce massive win numbers and trip his way into multiple Stanley Cups.