Montreal will officially make their first selection in the 2012 NHL Entry Draft at third position.

For the third consecutive year, the Edmonton Oilers pick first overall by virtue of winning the 2012 NHL Draft lottery.

The Columbus Blue Jackets slip to the second selection, while the Montreal Canadiens hold steady with the third pick in the draft. 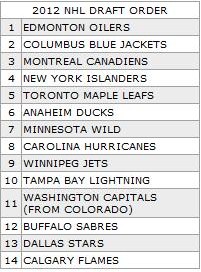 Edmonton ties the league record, with the Quebec Nordiques, for three consecutive first overall selections. This netted the Nords Eric Lindros, Owen Nolan and Mats Sundin. How the careers of Taylor Hall, Ryan Nugent-Hopkins and presumably Nail Yakupov will compare is of course an open question.

Third overall leaves Montreal in a pretty good position to take one of the draft's top-ranked forwards, be it Mikhail Grigorenko, Alex Galchenyuk or Filip Forsberg.

One thing the Canadiens won't be looking for with their first pick this June is a goaltender. However Malcolm Subban, brother of Canadiens defenseman P.K. Subban, is ranked as the top goaltender headed into the draft. The older Subban is happy for his younger sibling.