Don't let their standings fool you. The Edmonton Oilers don't like to lose, and they don't tend to give up the goat that easy, and will certainly compete, even when the chips are down. The Montreal Canadiens continue to play in close games, but rarely seem competitive.

You have to wonder just how close the Oilers are to achieving some success in the Western Conference, one two more seasons?

They have the talent up front, with the likes of 30-goal scorer Jordan Eberle, Taylor Hall and rookie Ryan Nugent-Hopkins. Goaltending is reasonable, with the pairing with Nikolai Khabibulin and Devan Dubnyk, and if the Oilers can tighten up on the blue line, the rest of the West could be in for a fight sooner than later. But for now, they'll just play out the season, making life miserable for playoff hopefuls.

The Canadiens will have Scott Gomez and Aaron Palushaj back in the lineup tonight. Both missed a pair of games with eye injuries. Consequently Louis Leblanc and Andreas Engqvist have been sent back down to Hamilton as they were both on emergency recall.

Reports are that Peter Budaj took the bulk of the work at practice Wednesday, and will get the start in goal for the Habs. Budaj is 13-6-3 (2.93, .886) in his career against Edmonton, all while with the Colorado Avalanche.

The Habs have not won in Edmonton since the inaugural Heritage Classic, on November 22, 2003. A classic moment from that game after the jump. 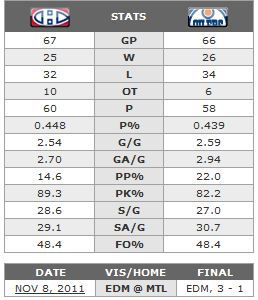 SBN Oilers coverage from the always enjoyable The Copper & Blue