The Montreal Canadiens embark on their traditional Western Canada Road swing, with the first stop being a visit to the Calgary Flames.

The atmosphere this time around will be a more familiar environment for both teams. The last time the Canadiens visited Calgary was during the Heritage Classic last February, amidst -20 temperatures.

The Flames are three points back of the San Jose Sharks for the final playoff spot in the Western Conference, and have gone 3-3-4 in their last 10 games.

Mike Cammalleri won't get a chance to face his former team however. The Flames center (yes, he's playing center now) is listed with an upper body injury.

Cammalleri's injury is in addition to the Flames' already hurting roster, who had recently thought to be turning the page on injuries with Curtis Glencross and David Moss returning to the lineup. Forwards Blake Comeau, Lance Bouma, Mikael Backlund, Blair Jones and Lee Stempniak, as well as defenseman Chris Butler, are among the injured list in Calgary.

To fill the void, the Flames called up an entire line from the Abbotsford Heat. Greg Nemisz, Krys Kolanos and Guillaume Desbiens are expected to be the fourth line tonight.

Miikka Kiprusoff blanked the Habs at the Heritage Classic, and allowed just a single goal against Montreal in their only other meeting this season.

Andreas Engqvist was called back up from the Hamilton Bulldogs on Monday, indicating that Aaron Palushaj and/or Scott Gomez will not be ready for tonight's game. Raphael Diaz remains out with an injury. 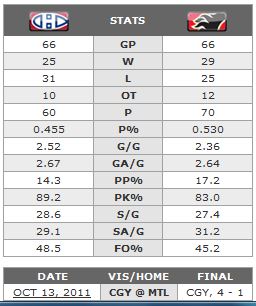 SBN Flames coverage from the crew at Matchsticks and Gasoline