In the 1955-56 season, the Montreal Canadiens were on their way to what would be the first of a record five Stanley Cup victories. Leading the team`s offensive charge at the time was center Jean Beliveau. He was just a handful of points ahead of the Detroit Red Wings`s Gordie Howe.

There was also another record on the verge of Beliveau`s grasp, the 26-year old mark of 43 goals, most by an NHL center, held by Ralph ``Cooney``Weiland of the Boston Bruins.

Before I go to far, let us will clarify one thing. For those history buffs who visit the Hockey Hall of Fame`s website, you would see that they acknowledge Joe Malone had the record at the time. Not so. During Malone`s run of 45 goals in 1917-18, Malone predominantly played wing while Newsy Lalonde and Jack MacDonald played center.

On this particular night, Beliveau was sitting on 42 goals and the Canadiens would be facing off against the Red Wings. The Habs had already clinched the regular season title, snapping Detroit`s run of seven straght titles. It was also the last meeting of the season between the two clubs, with the Canadiens holding an 8-4-2 record.

After the first period, it looked like Weiland`s record may stay at least another game. The two clubs were tied at two goals apiece. Dickie Moore had both Canadiens goals, while Alex Delvecchio and Dutch Reibel responded for Detroit.

An early second period goal from Lorne Ferguson put the Wings ahead. Beliveau already had an assist on one of Moore`s goals, and would tie Weiland`s record at 8:22 of the second period when he swung his stick at a rebound off Detroit goaltender Glenn Hall.

Ted Lindsay would give the Wings the lead to close out the period, but the rest of the way it was all Montreal. The Canadiens would fire 17 shots at Hall, with three finding the back of the net. Beliveau would get another assist, on a Floyd Curry goal, before setting the goal record at 17:04 of the third period, to close out the scoring. 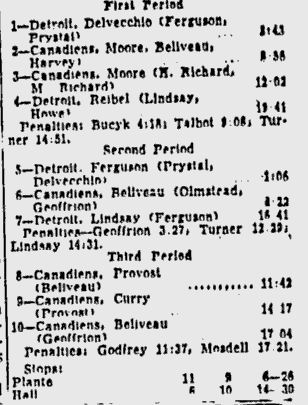 The Habs center`s two goals also gave him 100 in his career, making the night that much more special.

He now had a seven-point lead on Howe, a lead he would not relinquish. Beliveau would finish with a career best 47 goals and 88 points, clinching his first and only Art Ross Trophy, but fell short of The Rocket and Mr. Hockey`s records.

The gracious Canadiens legend was probably not over concerned with missing out on those two milestones, as he would pick up the first of two Hart Trophies, as the leagues most valuable player and his second of six career First-Team All Star selections as well as having his name engraved on the Stanley Cup, for the first time.

Beliveau`s record for goals by a center would stand for 13 years, when it was reclaimed by another Bruins legend, Phil Esposito, in the 1968-69 season.