There haven't been many teams that the Montreal Canadiens have dominated this season. The Ottawa Senators are one, and the surprising other is the New York Rangers who sit atop the Eastern Conference. After a brutally officiated first period in the first meeting between the two teams, the Canadiens have outscored the Rangers 11-3 (11-2 if you don't count empty netters).

Unfortunately for the Canadiens however three players who were dominant in the season series are injured or traded; Scott Gomez, Brian Gionta and Mike Cammalleri were all point per game players or better against the Rangers.

Fortunately the Canadiens' top 3 scorers in the season series are still playing in Max Pacioretty, Erik Cole, and Tomas Plekanec.

This years' Rangers are basically the exact opposite of this years' Montreal Canadiens. After a brutal start in terms of possession where they got absurdly lucky and won like crazy, the Rangers slowly got better and better.

It's pretty depressing to see the Rangers have a whopping 20 more wins that the Habs, but hopefully it'll be a good tilt!

Ryan White is a late scratch with the flu. 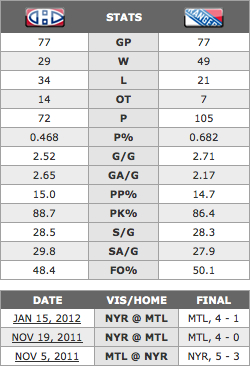