A day after Ron Wilson was relieved of his duties as head coach of the Toronto Maple Leafs, Randy Carlyle begins his tenure with the Leafs against their most historic rivals, our Montreal Canadiens.

Unfortunately for viewers, this isn't likely to be a classic game as the Leafs are currently collapsing out of a playoff spot into a lottery position, and the Habs have nowhere to collapse to. In fact discussion between Leafs and Habs fans on Twitter has given birth to the hashtag #greatesttankbattles.

It will be interesting to see how Joffrey Lupul reacts to Carlyle as head coach as they've had a strained relationship in the past. At this morning's press conference Carlyle stressed that he takes the blame for misusing Lupul and noted Lupul's injury history as a hindrance during that time.

Carlyle's first move as coach was to have Burke recall Jay Rosehill from the AHL's Toronto Marlies. Rosehill is on cecallable waivers and won;t be available until Tuesday. So no tilt with Brad Staubitz until April 7th.

On the Habs front, both Scott Gomez and Aaron Palushaj are out with eye injuries suffered against the Minnesota Wild on Thursday's bizarre 5-4 shootout win. Louis Leblanc and Aaron Palushaj have been recalled on an emergency basis to round out the lineup.

Carey Price missed practice yesterday, taking a therapy day for some minor injuries that are expected after a long season, but he will start tonight wearing a special mask designed by the winner of a contest. 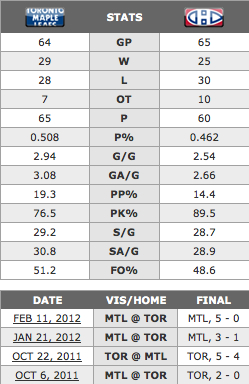 And the view from the other side, our friends, Pension Plan Puppets