It's certainly not a good time for the Florida Panthers to be on a losing streak. The cats have lost three straight games and, if they are not careful, could find themselves quickly falling from third place in the Eastern Conference to ninth and an abrupt end to their season.

The current Southeast Division leaders are 25th in five-on-five goals F/A, and have a 24th ranked penalty kill. Their power play is a respectable 11th in the league, but overall they're not exactly screaming Stanley Cup contender.

The Panthers did salvage single points, in a pair of shootout losses to the New York Islanders and Edmonton Oilers, over the weekend, giving them a three point lead over the Washington Capitals and Buffalo Sabres. But against bottom feeder teams this late in the season, those missed points could come back bite the Panthers.

Fortunately for them, they've managed to beat the Canadiens in all three meetings this season but don't be surprised to see the Habs wanting to play spoiler.

"We still want to win hockey games," said Canadiens coach Randy Cunneyworh, following Monday's practice. "Regardless of where guys are, the end result remains that we still want the 'W.'"

Jose Theodore is 4-1-2 with a 1.66 goals-against average in his last seven starts, but got shelled in his only Bell Centre appearance as a non-Hab. Scott Clemmensen is 5-0-0 (1.65 GAA, .942 SvPct) in his career against Montreal. 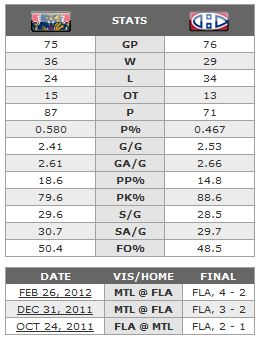 Interview with Mac Bennett, who says he plans to return to Michigan next season