Since everything was explained rather exhaustively in our previous reviews as well as part 1 on this review, I'm going to forgo the long intro and jump right into the analysis.

In case you need a refresher however, here are links to the original primer on advanced stats, the first quarter review, the half season review, and part 1 of the third quarter review which contains the table explaining what stats we're looking at for this quarter.

If you would like to follow the people involved in this project (either directly contributing or by supplying statistics) on twitter you can follow Chris Boyle (@ChrisBoyle33), Olivier Bouchard (@oli_bou), Christopher Boucher (@chrisboucher73), Gabe Desjardins (@behindthenet), and myself (@AndrewBerkshire) 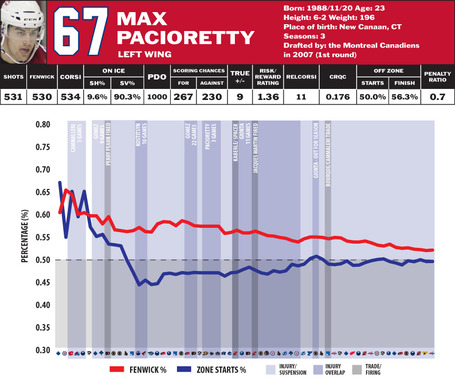 Max Pacioretty continues to be a dominant power forward and put up big numbers in spite of the team struggling. Shortly after the cutoff point for this review he became the Montreal Canadiens' first 30 goal scorer since Alex Kovalev in 2007-08. Max is still the best possession player on the Canadiens, and this is made even more impressive by the fact that he gets the toughest assignments of the players on his line, including not getting favourable zone starts. He has the second most scoring chances for next to Erik Cole and recorded the best ES risk/reward rating among all forwards. Put simply, Pacioretty has blossomed into a 1st line power forward who ranks among the top ten left wingers in the NHL. The most encouraging thing about Pacioretty's season is that he hasn't even been lucky. His production is sustainable and he has likely usurped Tomas Plekanec as the team's best forward. 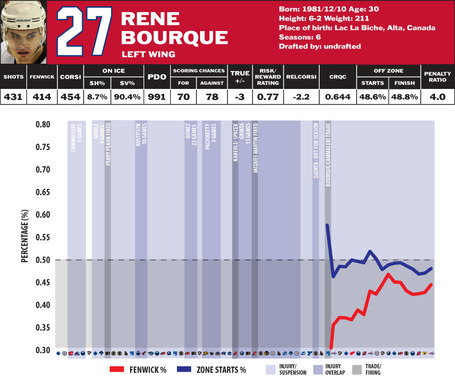 Rene Bourque has been amazingly disappointing as far as results are concerned, and it's unlikely that he can replace Mike Cammalleri's point production in the Canadiens lineup, but it's not all bad. What we're dealing with for Bourque is a very small sample of games where he's been phenomenally unlucky with the Habs and played a tougher role that he should be playing. Now keeping that in mind, after game 62 there's not much at even strength that works in Bourque's favour. Given his role his possession is slightly better than league average, and he doesn't push the play of the ice very effectively. He's taken four times more penalties than he draws, and has managed a negative scoring chance differential with the Canadiens. In fact, there are more scoring chances against per 60 minutes Bourque is on the ice than any other Hab, and only Kaberle is close. He also has the 2nd lowest even strength risk/reward on the team. Christopher Boucher makes the case that Bourque's poor performance is due to being uninvolved, and for a player who notoriously lacks motivation, that shouldn't be surprising on a team with nothing to play for.

Bourque's special teams stats are subject to small sample size for scoring chances right now, but his powerplay statistics are troubling for someone who's supposedly a top 6 forward. Having a negative scoring chance differential, even in a small sample, is nearly impossible on the powerplay. That Bourque has a team low (by a wide, wide, wide margin) 0.23 risk/reward rating on the PP suggests that he is largely at fault for this horrible differential. But let's move on to where Bourque is actually very good, and that's on the PK. Bourque has managed the second best scoring chance differential on the Canadiens while on the PK, and the best of the bunch among those with over a minute of PK time per game. This has come against the softest competition among all Habs penalty killers, but it's not something to ignore. He's also put up a very respectable Corsi score that includes his time in Calgary, and he drives the play forward effectively on the PK, pressuring opponents with his foot speed. Bourque still has an unimpressive risk/reward while shorthanded, but it's close enough to Moen's that we'll deem it respectable. 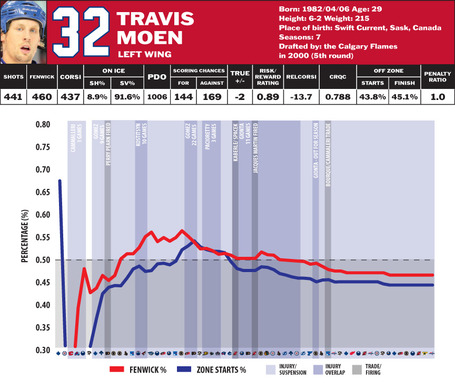 Travis Moen barely played in the third quarter, but we're still able to evaluate him by bringing in more statistics to give context to his performance. Before you judge Moen too harshly based on his near team low possession numbers, it's important to note that among Habs forwards, only Tomas Plekanec plays tougher minutes. Moen is below where you would expect him to be in nearly every metric, but all that is really telling us is what we already know; Moen shouldn't be used as a first line player. He can't handle those tough assignments anymore, or at least he can't handle them well enough to be a positive player. But he also doesn't give up much. He's only a -2 this season in this extremely rough role.

Moen is known as an elite penalty killer, but his performance there this year hasn't been quite as well as his peers. Moen actually put up around league average possession on the PK through 3/4 of the year (league average was -80.41) against weaker competition than the best shorthanded players on the team. His drop in penalty killing prowess carried through into scoring chance differential where he ranks 9th on the Canadiens and 5th among forwards who'd played more than a minute per game. Considering that his shorthanded play is a large reason for his salary, it seems to me that signing Moen back for a similar salary may not be prudent. 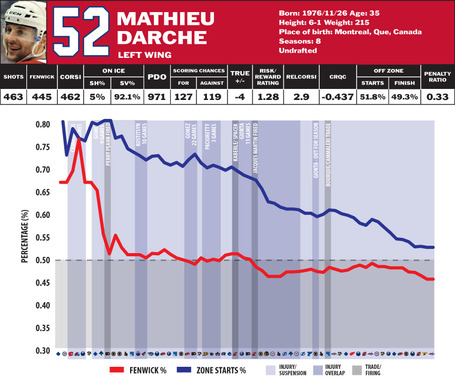 Mathieu Darche isn't usually used in the tough minutes role that Moen is, but he's more than earned his spot on this team. Darche faces a different challenge to Moen in that he's played with really bad players all year. His most common linemate this year has been Petteri Nokelainen, which doesn't help Darche produce offense in the least. In spite of this, Darche has put up a positive Rel Corsi and a positive scoring chance differential. He also draws three times more penalties than he takes, and records a very solid even strength risk/reward rating. Darche has also been very unlucky in both his personal shooting percentage (half of his career average as Hab) and on ice shooting percentage, so in all likelihood his production is set to increase next season.

Where Darche is really valuable is special teams. While fans complain about the coaching staff overusing Darche, his underlying stats show that they are entirely justified in doing so. It's important to note that Darche's powerplay sample is fairly small, but more importantly it nearly all took place while Jacques Martin was the coach, and during that time the powerplay was far more effective than it is under Randy Cunneyworth. That said, Darche recorded the best possession on the team, and the best scoring chance differential on the team in those limited minutes. His risk/reward rating is low, which is to be expected with his limited puck skills, but he wasn't ineffective like many fans believe. Contrary to his powerplay stats, Darche's shorthanded stats have a nice sample size to draw from. What we can see from that is beyond encouraging. Among Habs players with over 1.5 minutes played on the PK per game, Darche ranks first in scoring chance differential and third in Corsi. He drives the play up the ice effectively and generates more scoring chances for the team than any other player on the PK. His quality of competition on the PK is also second among forwards to Lars Eller. Looking through Darche's stats, it seems to me that if the decision comes down to him and Moen on who to keep next season, it should be Darche. He's cheaper, and more effective on special teams.

Just like with the centers we'll throw in the zone adjusted Corsi ratings. As stated in the comments in the previous post, we know that they're flawed to a certain extent but they're interesting nonetheless. 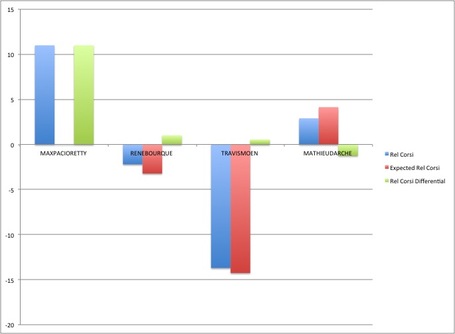