Share All sharing options for: Game Thread: Habs and Sens Say Farewell for 2011-12

The final meeting from the Montreal Canadiens and Ottawa Senators takes place on a rare Friday home game for the Habs.

The Senators have lost four of their last five, but picked up single points in two non-regulation losses (one to the Canadiens). They are grasping to their seventh place spot in the Eastern Conference, but still could catch the division leading Boston Bruins.

Colin Greening has three goals in his last four games for the Senators, while "Mr. Norris" Erik Karlsson has five points in his last five games. Karlsson and Jason Spezza have both picked up four points in the five games against Montreal this season.

Spezza has been battling the flu, but is feeling "a little bit better" and will take to the ice tonight. Craig Anderson gets the call in goal tonight. It will be Anderson's first start in goal, after missing over a month with a deep cut in his hand.

The Canadiens hold a 3-0-2 edge in the season series. Josh Gorges was the First Star in their last meeting, blocking ten shots in a penalty infested match just last Saturday.

Carey Price has played in all five meetings with Ottawa this season, and gets the call again tonight. 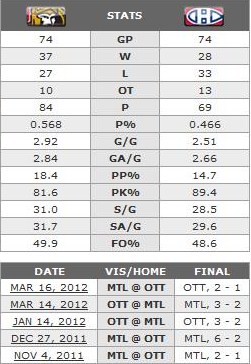