The Montreal Canadiens, after a few days away from game action, play three games in the next four nights, starting with a visit to the Buffalo Sabres.

The Sabres have scored three goals in each of their five meetings against the Canadiens this season. Four times it was good enough for a win. Montreal, averaging 2.55 goals a game, had to take it to a shootout to pull out their lone win against their division rival.

The Sabres are 6-2-2 in their last ten games, coming off a 7-3 dismantling of the Tampa Bay Lightning on Monday. They are still on the outside looking in at an Eastern Conference playoff spot. It won't be the easiest journey to the post-season, with a tough schedule up ahead.

To make it, a full two-point win is an absolute must for them. "I need difference-makers right now," coach Lindy Ruff said. "I don’t need to hear about great chances or missed (scoring) opportunities. Missed opportunities will put us in a bad place."

Marcus Foligno, Drew Stafford, and Tyler Ennis have a combined 11 goals and 25 points in the last five games for the Sabres. Ennis has nine points, converting a point in each of those five games.

Tyler Myers will be eligible to return to action tonight, following his three-game suspension for his hit on Scott Gomez, last Monday.

The media attempted to stir up a revenge mentality following the Canadiens Tuesday practice. Habs coach Randy Cunneyworth dismissed that, citing he feels Myers paid his dues and took responsibility for his actions.

Myers is on the same page, focused on what is needed for the team. "I'm going to approach it like any other game," he said. "It's in the past. I didn't mean to hurt him. It's not my intention to go in and kill a guy like that. Whatever happens, happens. I'm just going to focus on two points." 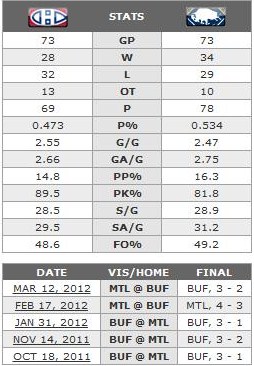 SBN Sabres coverage from Die By The Blade