Chris Boyle and I are changing things up a little bit this time around for the review of the Montreal Canadiens. In order to get content out quicker and to make the reading process a bit easier, we're splitting the breakdown up by position. We've also changed the statistics that will be counted slightly differently and changing out one statistic for another. We'll also be doing something new in that after 62 games, we can branch out into special teams to get a broader scope of the contributions of each player.

For explanations of the statistics that are being carried over, check out the first quarter and first half reviews.

After twice looking at luck based statistics like on ice shooting percentage, one ice save percentage, then putting them together for PDO scores, we decided that in order to get a better look at how lucky or unlucky a player is, we would factor in all even strength ice time instead of just time played while the score is close.

We're also going to be splitting up Christopher Boucher's risk/reward rating into even strength, powerplay, and shorthanded situations.

The only other change to even strength statistics is that we're getting rid of +/- based quality of competition because we feel Corsi Relative Quality of Competition is a better measure of competition and we likely don't need both. To fill this empty space we'll be adding in a Relative Corsi score for each player that will add extra context for possession. This way we have a measure of how each player performs at even strength overall, and not just while the score is close.

As mentioned we'll be adding in special teams to the equation. For the powerplay we'll be measuring raw Corsi and Corsi Quality of competition. risk/reward ratings, scoring chances for and against, and in an effort to measure which players are most effective, scoring chance differential per 60 minutes of powerplay time.

For the penalty kill, we'll be using those same statistics and throwing in zone starts and finishes to measure how well players clear the zone and force faceoffs outside the defensive zone when down a man. 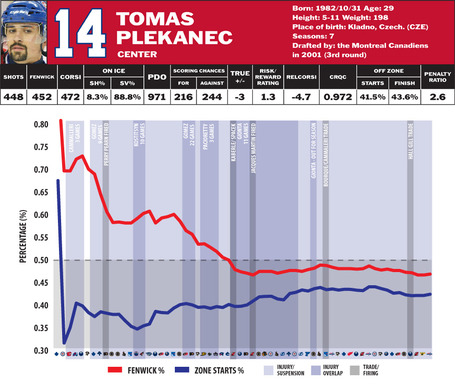 Tomas Plekanec continues to have a difficult season as his possession statistics continue to dive, however it seems that after 15 or so games behind the bench, Randy Cunneyworth noticed that Plekanec isn't a 3rd line center, and started using him the way he should be used, as a tough minutes center against the other team's best lines. Unfortunately this huge increase in his quality of competition came with linemates that aren't anywhere close to his skill level. Plekanec has also been very unlucky all season, getting only an 88.8% save percentage from his goaltenders. In fact Plekanec has the worst PDO of anyone who hasn't spent significant time on the Canadiens 4th line. Despite all these factors, Plekanec managed an even true +/- rating over the 3rd quarter of the season, and recorded the 4th best even strength risk reward among the team's forwards.

Plekanec is usually very strong at even strength, but even when he struggles there as he has this year, he's a beast on special teams. Of those who've played an appreciable amount on the powerplay, Plekanec ranks 3rd in risk/reward, 6th in Corsi, 3rd in quality of competition, and 5th in scoring chance differential per 60 minutes of ice time. This is in spite of playing more than half the year on the 2nd wave of the powerplay to make room for David Desharnais to play with the heavy hitters. On the penalty kill Plekanec puts up similar numbers, ranking 4th in risk/reward, 7th in Corsi, 5th in scoring differential per 60 minutes, and 4th in quality of competition. Plekanec is also the second most dangerous forward on the PK in terms of generating chances. Adding in special teams begins to show Plekanec's value to the team, even though he's had a trying season, he's still the team's best center. 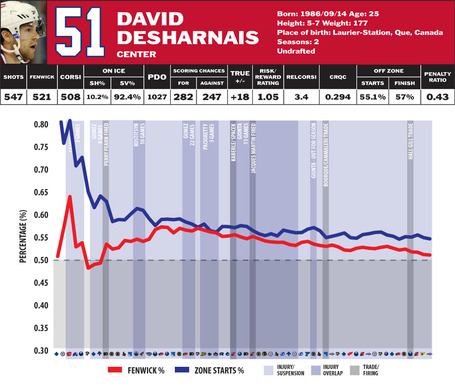 David Desharnais has managed to not lose much ground in comparison to his peers. Part of that is certainly his usage, but around the league there's no doubt that he's beginning to get noticed. Desharnais' production is still a bit better than his talent level as he's been the luckiest player on the Habs in terms of shooting percentage while he's on the ice at even strength. He's still facing weaker opponents and starting most of his shifts in the offensive zone, and among forwards no one has been on the ice for more scoring chances against this season. His risk/reward at even strength is still substantially below his peers as well. The long and short of it is the Canadiens still don't know exactly what they have with Desharnais. He could be strictly a points producer when put into this ideal situation, or he could be able to do this without such extensive support, until he is truly tested we just don't know. This is why there is such a harsh reaction when he is mentioned as a #1 center.

On special teams however, Desharnais is a known quantity. He's phenomenally impressive. While he hasn't justified his complete takeover of the top center job on the PP, his numbers there are still top notch. Numbers suggest that all around he's inferior to Plekanec on the PP as he puts up a worse scoring chance differential per 60 with superior teammates and has a lower risk/reward rating, but his playmaking capabilities there are undeniable. Desharnais could likely slot in as the center of the 2nd wave PP on nearly any team and be successful. On the penalty kill is a different situation because Desharnais is used very sparingly, and started in the offensive zone more than any other player who plays a reasonable amount of PP time. With those factors in mind, he has by far the best PK stats of any player on the team, it's just such a small sample size that it's impossible to know whether or not this matters. This may be because Desharnais often plays the last few seconds of a penalty kill when the faceoff is in the offensive zone. 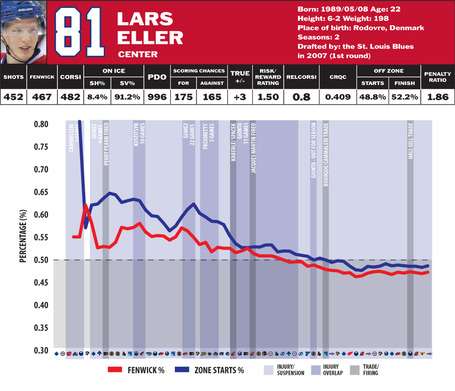 Lars Eller in many ways is has been as impressive as Desharnais, but is less heralded because his role isn't as flashy, and let's be honest, he's not French. Eller's possession stats have recovered a little bit since Cunneyworth realized he isn't ready to be a top line shutdown center, inching ever so slightly back to even. It's worth noting that while Desharnais has played with the highest quality of teammates of any Habs player this season, only Darche has played with a worse group than Eller among Habs regulars. Despite this Eller is one only two players on the Habs to maintain a positive true +/- not playing within that top 5 group of Pacioretty, Cole, Desharnais, Subban and Gorges. He's also maintained a positive scoring chance differential.

Lars doesn't get much time on the powerplay, but he's actually very impressive there when he does get the chance, getting his first two powerplay points this year right after the 62 game mark cutoff for this review. Of the healthy Habs forwards, Eller has managed the 5th best scoring chance differential on the powerplay, which would suggest he should definitely see more powerplay time, although this is over a small sample. Eller continues to grow as a two way threat for the Canadiens, and with that growth has come a level of skill while shorthanded that even Eller did not know he possessed. He had never played on the penalty kill before in his career, yet he's been a dominant force there this year. He's faced the highest quality of competition on the PK of any forward, and put up the NHL's 7th best Corsi. 7th in the entire league! This is while starting less often in the offensive zone than anyone but Nokelainen. Of the Habs forwards who've played an appreciable amount on the PK Eller has the second best scoring chance differential. Put simply, the comparisons to Plekanec and Mikko Koivu are very apt, this kid is being groomed into a tough minutes monster. 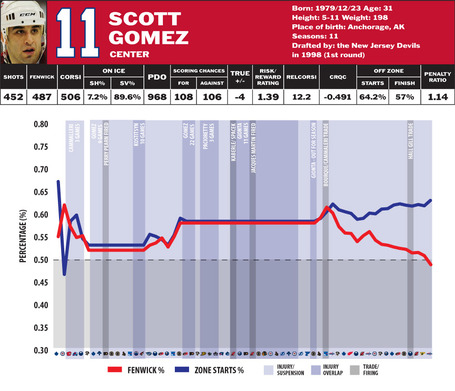 Scott Gomez seems to have fallen off of a cliff. Part of that could be that he doesn't fit into Randy Cunneyworth's style of play. Gomez has been heavily sheltered this year in terms of both quality of competition and zone starts, but is still barely treading water when it counts. His overall relative Corsi is still impressive, but taking into account how sheltered he is and how poor his other possession metrics have been, it's tough to see that as mitigating all these other factors. The evidence of his talent is still there with a solid risk reward and managing to stay slightly above even on the scoring chance count, and he has been very unlucky as far as save percentages go, but too many stats are pointing the wrong with with Gomez, and it's likely time to cut ties.

Gomez will never earn his salary, but the calls for him to be taken off of the powerplay are probably counter-intuitive. Well, as long as players like Gionta and Darche are still injured. Yes I said Darche. Gomez has managed a solid scoring chance differential on the powerplay, enough to rank him within the top 6 remaining PP forwards, but just barely and possibly just because Bourque has been so bad in that area. Another troubling thing for Gomez is while he used to be a fixture on the PK, he's barely been used there at all this year, and when he has been, he's been poor. Frankly Gomez isn't bringing enough on special teams to earn his roster spot next year and make up for his lack of a role at even strength. 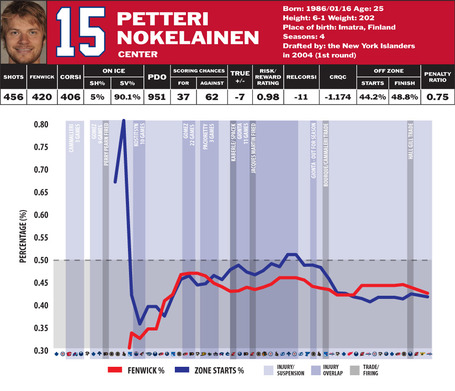 Petteri Nokelainen is still playing semi-regularly for the Canadiens, but can't for the life of me figure out why. Pick a stat, any stat, chances are Nokelainen will be the worst Hab by that measure. Every way you look at it, this player continuing to play games is pretty baffling. Perhaps the best decision Cunneyworth made since he took over was the brief period where he scratched Nokelainen and double shifted another center. The only saving grace for Nokelainen is that he doesn't get stuck in the defensive zone too badly when he starts there, and he draws more penalties than he takes.

Nokelainen doesn't really help his case on special teams. No regular penalty killer has a worse risk/reward rating, and his scoring chance differential is second worst on the team among those who play on the PK regularly. There is no reason for the Canadiens to keep employing this player, he probably shouldn't even be in the NHL.

Just for kicks I thought it would be a cool idea to throw in my zone start adjusted Rel Corsi ratings that I created about a month ago for each group of players. This is more to challenge perceptions than anything and shouldn't be considered analytical, but it is interesting to see how players performed relative to their usage. 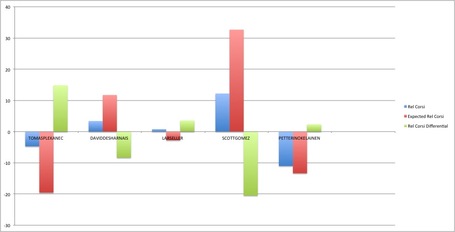