Islanders Come to Montreal to Battle Habs For 15th

Share All sharing options for: Islanders Come to Montreal to Battle Habs For 15th

The coveted 15th place spot in the Eastern Conference is up for grabs tonight as the New York Islanders come to Montreal to face the now streaking Canadiens. Yes folks, the Canadiens are on a hot streak of sorts, or as much of a one as can be imagined for a lottery team. The team is 3-0-2 in it's last 5 games, taking 8 of a possible 10 points.

This Islanders meanwhile have seemingly hit a wall, going 2-5-3 in their past 10 games and lost 5 straight, plummeting them to 15th in the conference. Their record now matches their goal differential, which is a conference worst -48. If the Canadiens win tonight it may all but assure that the Isles "win" the 3rd pick in the draft lottery as tonight is the first game of a 5 game road trip that could bury the team.

It's been a high scoring season series between these two teams, with Montreal winning the last two games by a combined score of 9-5. Max Pacioretty has done the most scoring with 4 goals and an assist in 3 games.

Odd Fact: Six of the nine Habs players to score against the Islanders this season are either injured or no longer with the team.

Carey Price is 2-0-0 with a .923 SVP and 2.50 GAA against the Islanders this season but Peter Budaj is likely to get the start after Price played in Ottawa last night.

Judging by the offensive effort, or lack there of, the team should be fresh tonight, but after playing 15:27 shorthanded last night, many Habs are likely exhausted. 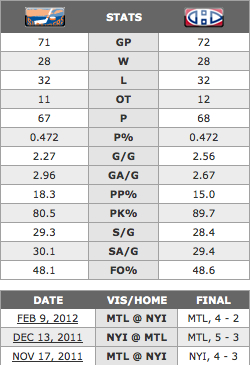