Share All sharing options for: Game Thread: Sens Host Habs in a Rematch

Two nights after the Montreal Canadiens handed the Ottawa Senators their 3rd loss in the 4 games played so far in the season series in Montreal, the Habs visit the Sens in Ottawa for a rematch.

The last game featured brilliant goaltending from Carey Price and Ben Bishop. Price got the last laugh on Wednesday as he was the first goaltender to stop Daniel Alfredsson in a shootout this season. Both goalies get the start in tonight's rematch.

Erik Karlsson has lit the league on fire in recent weeks but has struggled against the Habs this season with just 2 points and a whopping -7 rating.

The big scorers in the season series have been Erik Cole for Montreal with 3 goals and 1 assists in 4 games, and Jason Spezza for Ottawa with 2 goals and 2 assists.

Montreal's recent winning ways have threatened their lottery position in the impressively bad Eastern Conference. The New York Islanders have already taken over the coveted 28th overall spot, and a win tonight for the Habs would put them into a tie for 26th with the Carolina Hurricanes, just one point behind the collapsing Toronto Maple Leafs for the final lottery position.

Andrei Markov is being held out of tonight's game due to a surprise upper body injury, but many suspect that the organization is just being cautious with back to back games since Markov is still fresh off of a near 2 year absence.

Blake Geoffrion is a late scratch to make way for superstar Mike Blunden. 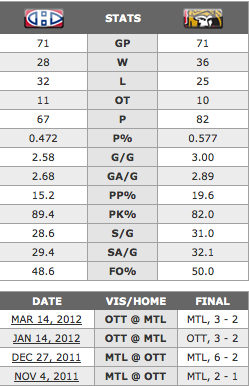