Things can go really well or really bad for the Ottawa Senators over the next few games. They find themselves just two points back of the Northeast Division leading Boston Bruins, but at the same time have only a seven-point edge over ninth place Buffalo.

They have to hope the momentum of winning six of their last eight visits to the Bell Centre gets them pushing up. The Habs would like nothing more than to make things difficult for them.

MacLean has been getting a lot of consideration for the Jack Adams Trophy as NHL Coach of the Year. Last season the Senators finished with 74 points and had a goal differential of minus 58. So far this season they already have 81 points and are in the plus in for/against by 10 goals.

The Senators will give Ben Bishop gets his first career start against the Canadiens tonight. The 25-year-old netminder is 2-0-1 (2.27, .926) for the Senators, since being acquired in a trade with the St. Louis Blues. The 6'7" Bishop was taken 80 spots after the Canadiens selected Carey Price in the 2005 NHL Entry Draft.

Erik Karlsson has 10 goals and 11 assists in his last 13 games for the Senators, and is a strong favorite for the Norris Trophy. Coach Paul MacLean is also getting a lot of Jack Adams Trophy consideration of late.

The Habs took Tuesday off, following a four game road trip that saw them play in three time zones.

Scott Gomez took a nasty hit from the Buffalo Sabres' Tyler Myers on Monday night. The Buffalo defenseman was given a three-game suspension for the hit. Gomez was injured on the play, and is out indefinitely with a concussion.

Tomas Kaberle 's partner is expecting today, so he is a question mark for the evening. The Habs called Up Frederic St-Denis from Hamilton, if needed.

Erik Cole has three points in three meetings with Ottawa this season. He is four goals shy of his career-high of 30. If the gets to that plateau, he and Max Pacioretty would be the first pair of 30-goal scorers for the Canadiens, since Vincent Damphousse and Pierre Turgeon did it during the 1995-96 season.

Price is 6-1-1, with a 1.62 goals-against average and a shutout, against Ottawa in his last eight appearances. 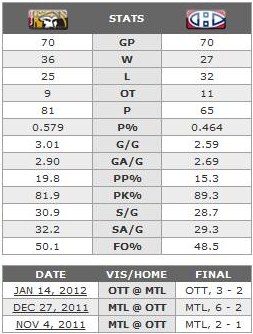