The Buffalo Sabres are still on the outside looking in on this season's playoff race, but are quickly making a legitimate shot for the post season. Buffalo has gone 7-2-1 in their last ten games,

A big reason for their recent success, has been the turnaround of goaltender Ryan Miller. The former Vezina winner has won five of his last six starts, and has been on fire since the All-Star break. The Sabres' number one man between the pipes will face Peter Budaj tonight.

The Sabres are expected to be without forwards Matt Ellis (knee) and Patrick Kaleta (neck , day-to-day), but got some good news that Tomas Vanek will return to the lineup. Vanek has been battling shoulder problems since taking a hit from Erik Cole on January 31.

Marcus Foligno, son of former jumping Sabre Mike, scored his first NHL Saturday in Ottawa. He says he's saving the trademark family leap until he pots one at home. Father Mike is making the trip down from Sudbury for the game.

Buffalo has won three of four meetings so far this season against Montreal, with the Habs taking the most recent in a 4-3 shootout win, on February 12. Max Pacioretty had the shootout winner that night, and has five points against the Sabres this season.

Pacioretty has five goals and five assists in his last five games for the Canadiens.

David Desharnais could be a game-time decision for Montreal.

A look at the Sabres' season, from HNIC's Elliotte Friedman, after the jump. 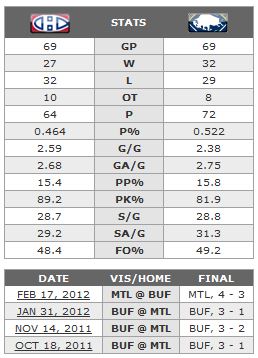 Sabres SBN coverage from Die By The Blade