The Canadiens make their lone visit to British Columbia as they meet the Vancouver Canucks tonight.

The Canucks took the first game of the season series, with a 4-3 shootout win on December 8, rallying from a 3-0 deficit with three unanswered goals, one of them shorthanded.

That game would be the end for Jacques Martin as head coach of the Canadiens.

Montreal will be looking for a bit of revenge obviously, and may be fortunate that Vancouver's top scorers are not producing of late.

Daniel Sedin has just a single assist in seven games, while brother Henrik Sedin has been held off the score sheet in that same stretch. Vancouver has seen some offense of late from a guy named Chris Higgins, who has six points in six games. Kevin Bieksa has five assists while on a four-game point streak.

The Canucks made some moves at the deadline, in an attempt to repeat as Western Conference champions. Samuel Pahlsson was acquired from the Columbus Blue Jackets, strengthening the team down the middle. It's hoped that he can regain his near Conn Smythe Trophy contending form that he showed with the Anaheim Ducks in 2007.

Vancouver's other deal saw Cody Hodgson (the First Star in the last game against Montreal) go to the Buffalo Sabres for Zack Kassian. Too early to call a winner on this deal, but long-term it could benefit the Sabres, and for that matter Hodgson.

The Canadiens will be without David Desharnais, who left Thursday's game, against the Edmonton Oilers, with a lower-body injury. Tomas Plekanec will take his spot between Max Pacioretty and Erik Cole. Louis Leblanc has been called up from the Hamilton Bulldogs (AHL), and will play on the fourth line.

P.K. Subban has six points in his last four games.

Carey Price will get the start in goal for Montreal, and Roberto Luongo will be between the pipes for Vancouver.

In a bit of surprising news this afternoon, Andrei Markov was taken off of the injured reserve and is cleared to play. Pierre Gauthier stated on the radio in Hamilton that Markov will play tonight, the Habs are likely to go with 7 D to ease Markov back into the lineup. It's unclear who will be scratched. 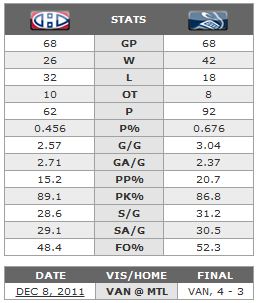