A pair of floundering teams get to square off tonight as the Canadiens host the Minnesota Wild. Both teams have struggled in their last ten games, with each going 3-6-1.

While we know the Canadiens playoff hopes are totally diminished, the Wild are clawing at the eighth and final spot in the Western Conference. It would be a very difficult climb for them to do it, with a tight pack of clubs ahead of them.

Goal production has also been a problem for both clubs. The Canadiens have averaged a goal a game in their five straight losses, while the Wild have scored two goals or less in five of their last six.

Despite the lack of offense, Dany Heatley has managed four points in the last five games for the Wild.

Mikko Koivu has missed six straight games with a shoulder injury, and the team has put him in non-contact status for another two weeks.

Things will look a bit different on the Minnesota blueline, after all-time games played leader Nick Schultz was traded to the Edmonton Oilers for Tom Gilbert. The deal surprised and shocked most of the Wild players.

The last time these two teams met, the Canadiens crushed the Wild 8-1, backed by a hat trick from P.K. Subban and Ryan White picked up a Gordie Howe hat trick. Travis Moen is the only other goal scorer from that game that is still on the Canadiens roster.

Brad Staubitz will play his first game against the team that placed him on waivers just prior to the trade deadline. Staubitz's toughness quickly emerged in Tuesday's loss to the Tampa Bay Lightning, where one of the newest Habs racked up 17 penalty minutes.

Blake Geoffrion will make his home debut for the Canadiens.

Randy Cunneyworth opted out of practice on Wednesday, so we should see the same Habs lineup as we did Tuesday.

Carey Price gets the call in goal for the Canadiens. 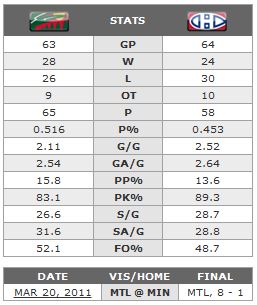