The Montreal Canadiens get another opportunity to play leapfrog in the Eastern Conference standings, as they visit the New York Islanders.

A win could move them into 11th place, depending on what the Tampa Bay Lightning do tonight. Both the Islanders and Lighting have two games in hand over Montreal.

The Islanders are 6-2-2 in their last ten games, coming off a 1-0 shootout win over the Flyers, Tuesday night.

Goaltender Evgeni Nabokov has been a big part of the Islanders' recent success, winning seven of his last nine starts, while allowing just a single goal or less in six of them.

The Russian netminder has faced just two shots against the Habs this season, stopping both. His only appearance came was a less than eight minute relief of injury prone Rick DiPietro, in the Islanders 4-3 win back in October. Nabokov is 5-2-0 (2.81, .893) in his career versus the Canadiens.

Update: Aaron Palushaj, just called up, is a healthy scratch. 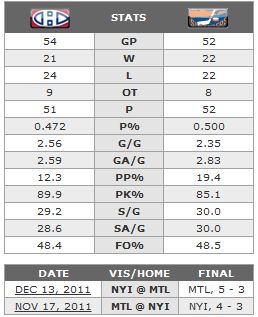