Yes folks, Sidney Crosby was skating with his Pittsburgh Penguins teammates Monday, but will not be dressed to ace the Montreal Canadiens tonight. Crosby said he is no closer to returning to the team, and is not ready for full practices on a regular basis

Even without "Sid the Kid" though, the Penguins have been on a tear of late, going 8-2-0 in their last ten games, and sitting in fifth place in the Eastern Conference.

They've had no problems with the Canadiens this season, having won all three prior meetings. The last was on January 20, a 5-4 shootout win in Pittsburgh, that saw Montreal lose the lead three times, including a two goal lead in the third period.

The big factor in the Penguins success has been Evgeni Malkin, who potted the tying goal and shootout winner in their last meeting. Malkin has 29 goals on the season and leads the league in scoring with 61 points.

Tyler Kennedy was sent back to Pittsburgh, to be examined for a lower-body injury.

Travis Moen is a game time decision tonight for the Canadiens, and has been the talk of trade rumors for some time. The latest report has the rugged winger going back to the San Jose Sharks.

Marc-Andre Fleury gets the call in goal for Pittsburgh, while Carey Price returns to the crease for the Canadiens.

Chris Boucher asks why Anthony Stewart was not claimed on waivers. 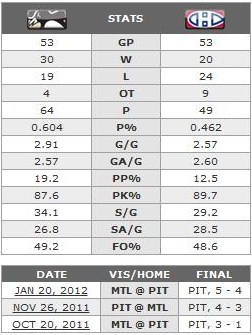