Share All sharing options for: Game Thread: Jets Fly in to Face Habs

Good news Montreal Canadiens fans, this team can't bet any worse in the NHL Eastern Conference. The Habs found themselves dead last in the Conference this morning, but could bounce back into 14th with a win over the Winnipeg Jets.

This is the fourth and final meeting between the two clubs, with Montreal holding a 2-1 series lead. In their last meeting, Lars Eller had a career night, potting four goals, and adding an assist, in a 7-3 win at the Bell Centre.

The Jets are crawling at a playoff spot, sitting four points back of eighth place, heading into this afternoon. If they want a playoff berth, their offense will need to pick up steam, especially on the road where they are 9-15-4.

Winnipeg is 4-5-1 in their last ten, and have two or less goals in nine of their last 11 games. Their power play has also struggled with just three goals in their last 31 opportunities.

But if there's a place to bag a road win theses days, the Bell Centre is the place. The Canadiens are one of two clubs with a below .500 record at home. The even worse Columbus Blue Jackets are the other.

Ondrej Pavelec gets the call in goal for the Jets. Carey Price will be between the pipes for Montreal.

Raphael Diaz is a healthy scratch for the Habs.

The Canadiens are 11-8-1 on Superbowl Sunday, but have lost the last five straight games. 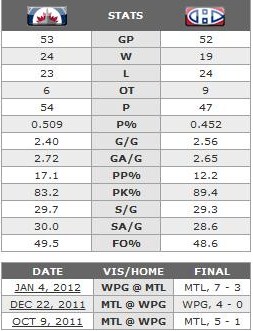 SBN Coverage of the Jets at Arctic Ice Hockey