This will be the second meeting of the season between the Montreal Canadiens and Washington Capitals.

The first meeting didn't fair well for the Canadiens (what game has?), when Michal Neuvirth whitewashed them 3-0 on January 18. Neuvirth has only had three starts since December 26, and given a loss and an 88-footer he let in against the Florida Panthers on Wednesday, we should see Tomas Vokoun between the pipes.

Alexander Ovechkin had one of Washington's three goals that night, and returns from his three-game suspension. While far off his typical season point totals thus far (39 points in 47 games), Ovechkin tends to bring out his A-game against Montreal. He has 27 (13 goals) points in 23 career games against the Canadiens, with 10 points coming while his team is on the man advantage.

Mathieu Perreault also contributed a goal in the last meeting between the two clubs, and has 7 points (5 goals - including a hat trick) in his last 6 games.

As a whole, the Capitals were dumped from third to ninth in the Eastern Conference standings, after the Florida Panthers leap-frogged over them for the Southeast Division lead, Wednesday.

One of the Caps biggest problems is finding wins on the road, where they third worst in the conference at 8-14-3 to go with a minus-20 goal differential.

But whether on the road or not, the Capitals have no problems when leading after 40 minutes. They are 15-0-0 when starting the 3rd period with a lead, which will mean lights out for the Habs if they find themselves in that position this afternoon. Then again having a lead hasn't down the Canadiens much good of late either.

With Canadiens playing their traditional back-to-back Superbowl Weekend afternoon games, Peter Budaj gets the call in goal against the Capitals. Budaj is 0-1 (3.81, .848) in 79 minutes of career action against Washington. 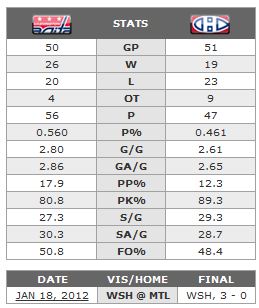 SBN Capitals coverage from the excellent team at Japers' Rink