Share All sharing options for: Game Thread: Depleted Habs Face Off Against Lightning

The trade deadline has come and gone, and while Andrei Kostitsyn is now a Nashville Predator, Chris Campoli and Travis Moen are surprisingly still on the Montreal Canadiens roster.

The Canadiens also added Brad Staubitz, a tough guy with little value as a hockey player. Staubitz however, could potentially add some fun to what will be a frustrating final 19 games of the year.

The Tampa Bay Lightning were active on trade deadline day, adding a couple of poorly regarded depth defensemen for minimal cost in Mike Commodore and Brian Lee as well as AHLer Keith Aulie. To grab Aulie, the Lightning gave up Carter Ashton, who was regarded as their best prospect since Brett Connolly has presumably graduated their system.

The Habs are coming off their third 4 game losing streak since Randy Cunneyworth took over as head coach of the team.

Tonight will also be the Canadiens debut for 4th generation Hab Blake Geoffrion. Geoffrion will wear number 57 to honour both his grandfather Bernie "Boom Boom" Geoffrion and his great grandfather Howie Morenz. Needless to say Habs fans shouldn't expect that kind of greatness from Blake, but it's one of few feel good stories in a depressing year for the Canadiens.

To add to the depressing year, Canadiens legend Jean Beliveau was hospitalized this morning with a stroke. His family asks for their privacy during this time. 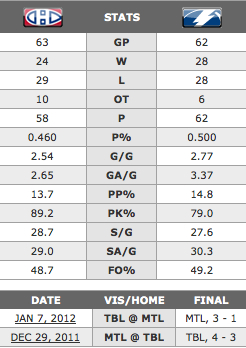