The Montreal Canadiens were certainly on fire through the winter of 1977-78. Already coming off the most dominant season in hockey the previous season, the Canadiens showed no evidence of slowing down.

Their next opponents on February 25, would be the New York Rangers. The Blueshirts, led by coach and former Canadiens defenceman Jean-Guy Talbot were a struggling team at the time.

They were sporting a 20-29-11 record at the, but many of those losses were a case of bad luck in their favor. Nonetheless they were in last place at the time. They had lost all three prior meetings to the Canadiens that season by a combined score of 16-5, and hadn't won at the Montreal Forum in six years.

With that in mind, Rangers GM, and former Habs tough guy, John Ferguson decided to give the Canadiens, and the Rangers, a bit of a surprise.

Fergie had called up a Swedish goalie, that he had signed in the fall of 1977, from the Rangers minor league club, the New Haven Nighthawks to face the league's best team at the Montreal Forum.

The goalie's name was Hardy Astrom, a man more infamous for being the butt of many a joke years later at the hands of Donald S. Cherry.

Update: Video footage of the game, via Francis Bouchard, after the jump.

Entering the game, Astrom would be only the second European-trained goalie to play in the NHL. He had been preceded by Goran Hogosat earlier in the season.

As daunting a challenge the Canadiens would be, Astrom had battled and won against the best in Europe, including the powerhouse Czechoslovakian and Soviet Teams of the era, and done it on their turf. He won a Silver Medal, with Team Sweden, in the 1977 World Championships and had faced North American competition during the Canada Cup. 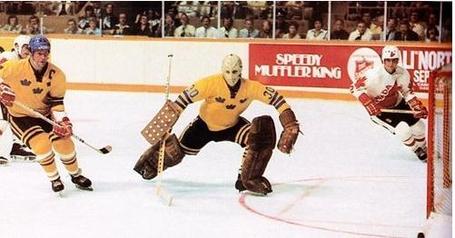 It was perhaps his past experiences that kept the 26-year-old netminder's nerves calm.

"I wasn't nervous at all," Astrom said. "I said to myself, 'You should be nervous,' but I wasn't. Even when the time got closer, I didn't get any more nervous."

The Rangers admittedly didn't play their best game on the night, nor did the Habs, but they knew they had to work hard for their rookie goaltender. The visitors were also on the receiving ends of the lucky bounces off the Forum ice and along the boards throughout the game. A Canadiens goal that was waved off also indicated that the night was not going to go in favor of the home team.

Steve Vickers and Phil Esposito (tip-in) gave the visitors a two-goal lead, in a 25-second span, midway through first period. Jacques Lemaire responded shortly after to cut the Rangers lead to one.

Another pair of goals from Eddie Johnston and Don Murdoch put the game out of reach for the Canadiens in the second period. Rookies Ron Duguay (deflection) and Mark Heaslip added insurance markers in the third period.

Yvan Cournoyer and Shutt scored third period goals for the Canadiens, but by then the game was out of reach. The Roadrunner's goal eluded Astrom when it deflected off defenseman Ron Greschner.

"We got lucky," said Esposito. "but isn't it about time? We've been playing well, but haven't been getting any breaks."

Don Awrey, the former Canadien picked up the game's First Star on the night. "They had to have a bad game sooner or later," Awrey said. "I don't think they were as sharp as they have been on this streak."

Awrey also stressed the importance of playing well for their goalie, and echoed Esposito's thoughts. "We wanted to play well for ourselves, but we also knew we had to play for Hardy," he said. "And how long can a puck keep bouncing for you? It had to happen some time."

In the other dressing room, Larry Robinson knew the team gave the opposition too many chances. "It wasn't so much that we lost, as the way we lost," he said. "We played so badly. We knew that this is a team capable of putting pucks in the net, and we gave them all sorts of two-on-ones and three-on-twos."

Serge Savard knew that eventually the streak would have to end. "We got no reason to be ashamed," he said. "We've lost one game in 29. Some teams play 29 and win two or three. We played badly in a couple other games on the streak and won them. This time, we didn't get away with it."

Astrom in the meantime, had his first NHL win on a 29-save performance. "I had played big games before with Sweden. I had beaten the Russians in Moscow and the Czechs in Prague," Astrom said."I thought I hada good chance of beating the Canadiens in Montreal.

For Astrom however, his stay with the Rangers would be brief. Competing for a job with John Davidson and Wayne Thomas, he would play just three more games with New York, finishing with a 2-2 record (3.5 GAA). He would return to New Haven, and finish with a respectable 17-5-3 record and a 2.71 GAA and .913 SvPct.

Feeling mislead by Ferguson, that he would get to play more in the NHL, Astrom elected to go back to Sweden the following year. The Rangers traded his rights to the Colorado Rockies and he was back in the NHL for the 1979-80 season.

Unfortunately for Astrom, either his skill set was on the decline or it was the fact he played for some miserable Rockies teams, or both. That season with Colorado, Astrom spotted a record of 9-27-6 and a 3.75 GAA.

Don Cherry, now coaching the Rockies, put the teams struggles directly on his goalie, despite continuing to play him.

"I never thought of myself as the ultimate connoisseur of goaltenders but one look at the guys we had between the pipes convinced me that our goalie problems weren't big, they were colossal," Cherry noted in his autobiography. "Astrom, if he was at his best, would be lucky to make it in the American league, and he was our number one goalie!"

Then there's Cherry's legendary tales of how he and the Rockies players would take shots in practice from the blueline, and Astrom was unable to stop them. "Each one of them went right along the ice and beat Astrom. I doubt that my wife, Rose, would have missed more than two of them!"

Cherry claims Astrom drove the other teammates to tears with his play, and that he begged Rockies GM Ray Miron to trade him or find another goalie.

Miron didn't and fired Cherry at the end of the season, spurring the latter on to television fame and fortune. Grapes may have got the last laugh though, as Astrom stayed on for another year in Colorado, with equally unimpressive stats (6-15-6, 3.76 GAA), splitting the season in the minors.

After a full season in the CHL, Astrom returned to Sweden to finish his career. The highlight of his NHL career remaining his first win in Montreal.