The Montreal Canadiens make their way to the District of Columbia, for the first time this season, as they pay a visit to the Washington Capitals.

The Habs will hope playing their opposition on the road will pay better dividends than it did at the Bell Centre. The Capitals took both games in Montreal by 3-0 decisions.

The Capitals remain on the outside looking in, and have been a bit of a wreck of late going 3-7-2 in their last 12 games. If they hope to make a run for the playoffs, they'll need to turn things around in a hurry. The team was crushed by the Ottawa Senators on Wednesday, with Alexander Ovechkin missing the game with an upper-body injury.

Washington's leading scorer wore a non-contact jersey on Thursday, and skated briefly. He could be a game time decision (though doubtful) on a squad already also missing two other key players, Nicklas Backstrom and, until recently, defenseman Mike Green, to injuries.

The Capitals showed on Thursday that Montreal is not the only city in the hockey world where a coach and player have issues. Roman Hamrlik, upset with coach Dale Hunter scratching him Wednesday, called out his coach over penalty issues. The team also held a players-only meeting on Thursday.

Tomas Vokoun has been miserable between the pipes as of late, though he did record the Caps last shutout against the Canadiens.

This Day in Habs History

1990: The Canadiens set a team record with 61 shots on goal in a 11-1 thumping of the Pittsburgh Penguins

And one for Canada

2002: Joe Sakic scores two goals and adds two assists in Canada's 5-2 win over Team USA to claim Olympic Gold. But the real reason we won was a loonie embedded at center ice in alt Lake City.

and while we're at it, for our southern neighbours

1980: Team USA completes it's stunning Olympic performance, claiming the Gold Medal with a 4-2 win over Finland 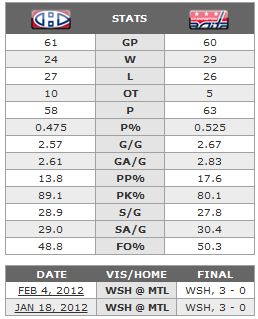