Game Thead: Habs Get A Visit From Familiar Faces

Share All sharing options for: Game Thead: Habs Get A Visit From Familiar Faces

This is the one and only encounter this season between the Dallas Stars and Montreal Canadiens. The two teams did meet up in the pre-season.

The Stars are struggling to grab the final playoff spot in the Western Conference, and have lost five of their last six games. The Boys from "Big D" are 3-5-2 in their last ten games.

Leading the Stars in goals this season, with 23, is Michael Ryder. Remember him? Mike Ribeiro should be another familiar name to Habs fans, and has seven points in his last seven games. One former Canadiens player who will not dress tonight is Sheldon Souray. The Dallas rearguard is out with a foot injury.

Much like the Canadiens did with Hal Gill last week, the Stars sent veteran rearguard Nicklas Grossman to the Philadelphia Flyers on Thursday, in exchange for a second-round pick in 2012 and third-round pick in 2013. As with Gill, Grossman will be an unrestricted free agent on July 1.

Tomas Plekanec is a late scratch due to a virus he's dealing with. 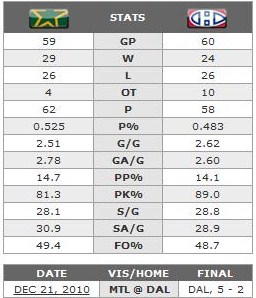