Game Thread: It Could Be a Devil of a Night for Habs

Share All sharing options for: Game Thread: It Could Be a Devil of a Night for Habs

So which Montreal Canadiens team will show up tonight? The one that surprised the crap out of the Detroit Red Wings, and gave fans a sign of hope, or that deflated squad from Tuesday night against the Buffalo Sabres?

Their opponents, the New Jersey Devils, are currently playing leap frog with the Toronto Maple Leafs and Florida Panthers for the seventh and eighth playoff spots and are 6-3-1 in their last ten games. We can expect them to show up contending.

This will be the third meeting between the two clubs this season. The Habs won the first meeting 2-1 on December 10th. They then spoiled Randy Cunneyworth's NHL coaching debut, a week later, in a 5-3 loss. In that game, the Canadiens squandered a 3-2 lead, and were booed heavily by the Bell Centre crowd in the third period.

No stranger to the Canadiens between the pipes for the home team, as Martin Brodeur will get the start in goal. With the Devils in a good position for a playoff spot, Devils coach Peter DeBoer said he plans to load up the all-time leader in wins with games for the rest of the season. Brodeur will get the occasional spell on back-to back nights from Johan Hedberg.

The Devils will be missing Calder Trophy candidate Adam Henrique, who is battling a groin problem. Henrique has 34 points in 43 games this season. Henrik Tallinder was placed on IR Tuesday, with a blood clot in his leg, and is expected to be out 6-8 weeks.

Devils forward Eric Boulton was fined $2500 for a slash on Mike Rupp in Tuesday night's game against the Rangers. 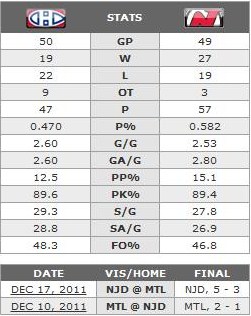 SBN Devils coverage at In Lou We Trust