The Montreal Candadiens woke up this morning, finding themselves in 13th place in the NHL's Eastern Conference. The good news is that they remained six points back of the eighth place Toronto Maple Leafs. Only now, there's a couple more clubs sandwiched in between them.

Their opponents on the early evening, the New Jersey Devils, sit sixth in the Conference, but have to watch their backs to maintain their position.

The Devils don't seem to have that concern at the moment, going 7-1-2 in their last ten games. They have also picked up wins in their last two meetings with the Canadiens, both 5-3 decisions.

In both of those games, New Jersey scored three unanswered goals and stole four precious points from the Canadiens. You have to think the Habs will have that on their minds tonight, especially with a playoof chance still within their grasp.

Zach Parise and Ilya Kovalchk will be the Devils forwards that the Canadiens will want to contain. Parise has 11 points in the Devils last ten games, while Kovalchuk has 17 points in his last nine.

Louis Leblanc is under the weather, so Aaron Palushaj will take his spot in the lineup.

"The Pawn" Carey Price will get the start in goal for the Canadiens. As expected, Martin Brodeur gets the call for the Devils.

This Day in Habs History

1977: Yvan Cournoyer records his 399th and 400th career goals with the Canadiens, and Jaacques Lemaire scored his 300th. The Habs beat the Philadelphia Flyers 5-2, extending their home unbeaten streak to 23 games (18-0-5).

The Canadiens will honor the passing of Gary Carter with a pre-game video tribute. The players will wear No. 8 jersey's in the pregame warm-up and decals on their helmets. The jerseys will be auctioned off, with proceeds going towards the Gary Carter Foundation. The family has also released his official obituary. 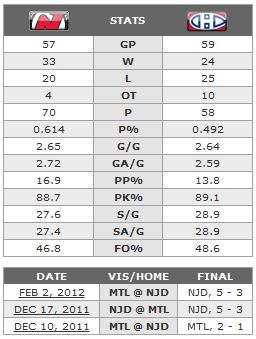 SBN Devils coverage from In Lou We Trust