Remember How Sunday NHL Hockey on NBC Used To Be?

Share All sharing options for: Remember How Sunday NHL Hockey on NBC Used To Be?

Today is Hockey Day in America. To celebrate the day in the U.S. of A, NBC and NBCSN are provided nine hours of NHL action.

The Montreal Canadiens hosting the New Jersey Devils is part of their broadcast schedule.

Larry Robinson will be behind the bench, as an assistant coach for the Devils tonight, and had an integral part in a Sunday February telecast by NBC in 1974.

Suffice to say, the second period of the national broadcast between the Canadiens and the Philadelphia Flyers ended in a bit of a tussle. You've likely seen the following clip a few times in the past.

The melee was a buildup that followed Dave Schultz's retaliation punch on the Canadiens John Van Boxmeer, on a delayed tripping call on the Canadiens rookie. Van Boxmeer gave the Flyers tough guy a shove as the whistle blew and the pair got tied up. Van Box Meer dropped his gloves, but apparently had his head down and did not see the punch coming. He was knocked out cold for 30 seconds. Even Schultz was surprised by how quick it happened. Van Boxmeer did return to the game. Clearly back then there was no dark room for the NHL. 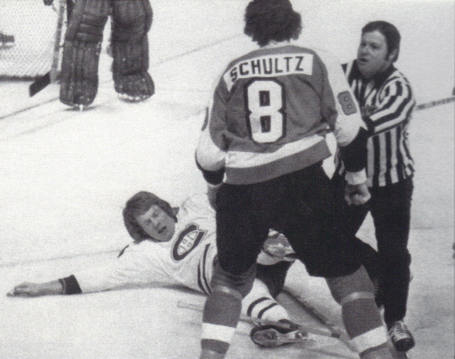 "John really threw a scare into Schultz," said Canadiens defenceman Pierre Bouchard. "Schultz had a look on his face as if he were afraid he had killed him."

As the period ended, Bouchard confronted Flyers captain Bobby Clarke in the corner and his teammates came immediately to his aid. The Habs bench quickly followed.

You'll also notice that Robinson appears on the scene late. He had already made his way to the Canadiens dressing room, before the period was over, for an equipment adjustment. When he learned what was going on. He quickly headed back to the ice, fearful that he might trip over his partially tied skates.

Robinson and Schultz paired off in a four punch fight that saw Big Bird land all the decisive blows.

"He grazed my head three times," admitted Schultz after the game. "I was lucky."

When it was all sorted out, referee Art Skov had dished out 91 minutes in penalties. The Flyers Bob Kelly and Andre DuPont were both tossed for being the third man in, with the former getting an additional four minutes for being the first to leave the bench. Kelly later received a one-game suspension for his actions.

Clarke, Schultz, Robinson and Bouchard all received fighting majors, though Clarke and Bouchard admitted they never even threw a punch at each other. Serge Savard, already serving a five-minute high sticking major, left the penalty box and was assessed an additional two minutes and also given the boot.

Back then, there was no man in between the benches for the networks telecasts. Can you imagine a Pierre McGuire type trying to do an interview with Fred Shero or Scotty Bowman following this?

Even the broadcast crew got into it. NBC play-by-play man Tim Ryan said that Clarke had the reputation of being a "dirty player," to which analyst "Terrible" Ted Lindsay said "He isn't dirty. He has guts. If you don't have guts and you can't take it, you don't belong in hockey."

The score of the game, for those interested was a 2-2 tie. Chuck Lefley and Murray Wilson both scored in the second period for the Canadiens, who were drained following the period ending brawl.

In the third period, Gary Dornhoefer scored on a point shot that Canadiens goalie Wayne Thomas admitted he lost sight of. With the man advantage, Ross Lonsberry capitalized on Guy Lapointe's whiff on a pass attempt in the defensive end to tie the game up. Philadelphia outshot the Habs 12-6 in the final 20 minutes.

"The fight inspired us. The Canadiens knew they had to play physically today, and they matched us bump for bump, " said Shero. "Maybe they thought they had us after that. But you still have to hit, and I don't think they hit anyone in the third period."

When the game ended, the fans at the Forum gave both teams a standing ovation."The fans really enjoyed it, didn't they?," said Bouchard.

Including that game, the Canadiens held a 2-1-1 series lead over the Flyers. The "Broad Street Bullies" evened the series with a 6-0 win two weeks later on route to their first ever Stanley Cup.

Of note, this was the first season that players wore name tags on their jerseys for NBC telecasts. The network asked NHL President Clarence Campbell to do so, to make it easier for their viewers to identify the players. Until that time, name tags were optional by the teams, until they became mandatory at the start of the 1977-78 season.

Note: Thanks to Francis Bouchard for digging up the lead photo and digging up further notes, and Robert Lefebvre, for also lending a hand. Robert also has a earlier post, highlighting this game and more of Robinson's heroics.