Share All sharing options for: February 18 1967: Vachon Makes NHL Debut With the Habs

It can be easily argued that the Hockey Hall of Fame is missing quite a few names on it's wall of enshrined members. The late Pat Burns is one of the most recent that comes to mind. In the player department, one player immediately comes to my mind,and that man is Rogatien "Rogie" Vachon.

A case for Vachon's induction to the HHOF has been made on several occcasions, including those by Robert Lefebvre, Dave Stubbs and Todd Denault.

Called up for the Habs farm team in Houston, he 21-year-old rookie would face the Detroit Red Wings, and come out on the winning end with a 41-save performance.

His first stop would be on a breakaway by Gordie Howe, in which Vachon came out to stop the 30-foot shot. "I expected to do it differently," said Howe. "But the kid made a heck of a save. He looks like a pretty good netminder."

"There was no time to be nervous," Vachon said on facing the Red Wings legend. "I just thought about making the stop and not about who it was."

Howe would eventually beat Vachon, and Dean Prentice would be the only other Detroit player to score in the 3-2 win.

Vachon's performance gained praise from head coach Toe Blake. "He'll be up here a long time if he keeps playing like that.," Blake said. "He's very cool and alert. It was a gamble that paid off." The gamble the Habs coach was referring to was playing the rookie over Charlie Hodge.

"I figured I was just here for the ride," Vachon said following the win Saturday night. "I sure got a surprise when the coach told me I was going to start."

Vachon would get the call the following evening against the same Red Wings team. This time he would be on the losing side of a 3-1 decision. Floyd Smith's shot just got past Rogie and off the post and Detroit's second was a deflection off his own defenceman. Vachon was on the bench when Detroit scored a third time.

Vachon never went back to the minors, and remained in the NHL until 1982, playing with with the Canadiens, Los Angeles Kings, Red Wings and the Boston Bruins 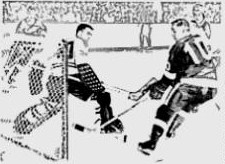 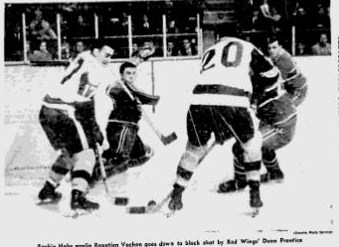 The Man Who Would Be King by Todd Denault

Vachon honoured by his hometown