Game Thread: Habs Visit Sabres in a Must Win Game

Share All sharing options for: Game Thread: Habs Visit Sabres in a Must Win Game

The Montreal Canadiens will have another valuable four-point game in there last ditch effort to make the playoffs this season. Despite the Buffalo Sabres record this season, it won't be easy.

Lindy Ruff's squad has beat the Habs in all three meetings this season, in which all three games could have gone in Montreal's favor. Ruff knows how to adapt well in game situations, which he demonstrated well in the Sabres 3-1 win over Montreal on January 31.

But with a Canadiens win tonight and a strong finish through February, the remaining two games against Buffalo could be highly beneficial.

With Jhonas Enroth getting the start, and getting chased, Thursday against the Philadelphia Flyers, Ryan Miller will be between the pipes for the Sabres tonight. Miller has allowed just a single Canadiens goal in each of his starts this season.

Carey Price has been outstanding against Buffalo, despite being unable to record a win this season. He has a 1.97 GAA and a .935 SvPct in all three games against the Sabres.

With Hal Gill traded this afternoon, Erik Cole will now be an alternate captain for the Canadiens. 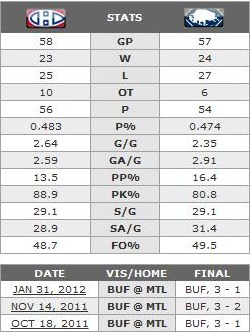 SBN Sabres coverage at Die By The Blade