Share All sharing options for: Game Thread: Last Tango for Habs, Bruins in 2011-12?

Well this is it folks. the last chance for fans of the Montreal Canadiens to see their team square off against Boston Bruins this season. Yes I know, there's still the playoffs....

Tonight's game will be a chance for the Habs to salvage a season series split with the defending Stanley Cup champions. The Habs took the first two games, while the Bruins took the following three. All but one game have been one-goal decisions.

The question is, will the Canadiens play to the level of their opponent? When they do, it's typically a good outcome. We saw the opposite of that on Monday against the Carolina Hurricanes.

Boston pretty much has a top-three playoff spot all but sewn up, holding a four-point lead over nearest Northeast Division opponent, the Ottawa Senators, with five games in hand.

Still the it appears the Bruins are leaving no margin for error in a look to repeat as Cup champions and are working towards the close and distant future.

The Bruins signed defenseman Johnny Boychuk to a three-year, $10 million deal on Monday, practically solidifying their defense corp through at least 2013. Joe Corvo remains the only regular rearguard unsigned, and he would become an unrestricted free agent (UFA) on July 1.

There also speculation that the Bruins may be looking to strengthen their team as the playoffs approach. The most recent talk is Tuomo Ruutu and Jaroslav Spacek going to Beantown.

Defenseman Andrew Bodnarchuk and forward Joshua Hennessy were called up by the Bruins from Providence (AHL) as they embark on an 11-day road trip.

The Canadiens in the meantime took out some frustration during Tuesday's practice, after Scott Gomez and coach Randy Cunneyworth got into it. Of course the Montreal media just ate that up.

Ryan White will make his season debut, after playing a four-game conditioning stint with the Hamilton Bulldogs. White had five points (four goals) in that stretch. 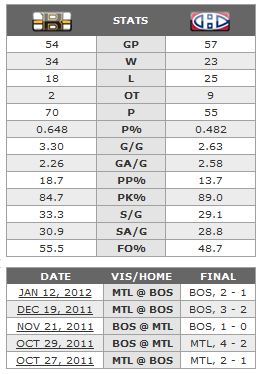